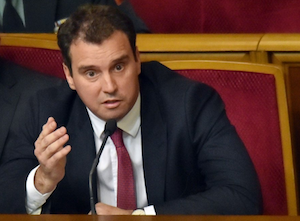 Aivaras AbromaviciusAbromavicius asked Parliament to approve his resignation in the next few days, according to the Kyiv Post.

BBC reports that Abromavicius, a Lithuanian and one of several non-Ukrainian experts brought in after President Petro Poroshenko took office, said that there were actions taken to paralyze reforms, “ranging from a sudden removal of my security detail to the pressure to appoint questionable individuals to my team or to key positions in state-owned enterprises.”

He said that the “more radical our actions, the deeper our reforms, and the bigger our progress, the more pressure we had to endure,” according to the statement.

Pavlo Sheremeta, Abromavicius’s Ukrainian predecessor, also resigned due to frustration, according to the BBC.

Abromavicius’s resignation sparked dismay, with 10 Western ambassadors saying that he and his team implemented “tough but necessary economic reforms to help stabilize Ukraine’s economy,” according to a statement published on the website of the Embassy of Sweden in Kyiv.

Abromavicius said that he wanted his resignation to serve as a “warning call,” and that he was not acting out of emotion, according to the Kyiv Post.