Viktor Uspaskich, a member of the European Parliament and a former multi-millionaire, was sentenced to four years in prison for fraud in 2013. This week three judges overturned that conviction on appeal. 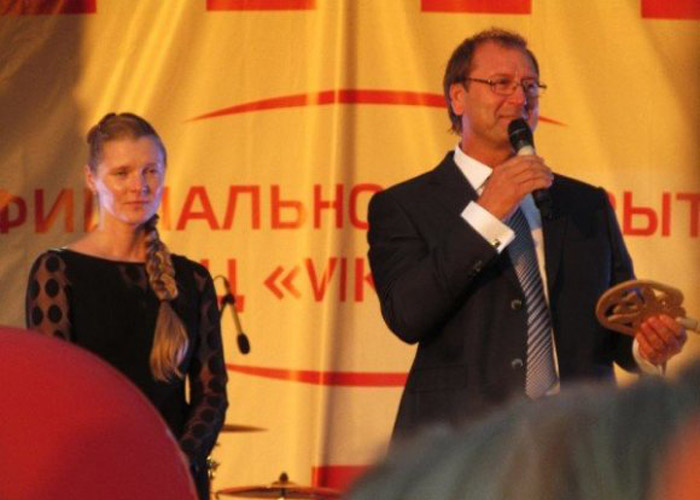 Viktor Uspaskich at the opening of Vikonda Mall in RussiaThe court process isn’t over yet. Prosecutor Saulius Verseckas intends to appeal the case to the Supreme Court of Lithuania in hopes of reinstating Uspaskich’s jail sentence.

The case dates back a decade, when the headquarters of the Labor Party were raided by law enforcement, seizing financial documents that showed € 7 million (US$ 7.8 million) of undeclared cash in party coffers. Russian-born millionaire Uspaskich, the party’s founder, fled to Russia before returning in 2007 to face the charges.

Along with two other members of his party, current Parliamentarians Vytautas Gapšys and Vitalija Vonžutaitė, Uspaskich was charged with organizing a large-scale accounting fraud.

The case was delayed repeatedly, due to the suspects’ or their lawyers’ illnesses or political processes. For example, Uspaskich, who was elected to the Parliament and also to the European Parliament, had Parliamentary immunity which had to be revoked.

Finally, in July 2013, Vilnius County Court convicted Uspaskich, Gapšys, Vonžutaitė, and former party accountant Marina Liutkevičienė of false accounting and fraud. Uspaskich got the heaviest sentence – 4 years in jail and a fine of € 6,800 (US$ 7,600).

All four appealed, but Vonžutaitė's case was separated due to her pregnancy. With the remaining three, the Court of Appeals found that they were not guilty of tax fraud, despite the € 7 million in undeclared funding. Judge Violeta Ražinskaitė, in a recent interview, explained that boosting party coffers was the plaintiffs’ primary goal, not tax evasion, so “intent” was not proved.

“His goal was a bit different: to get sufficient funding for the Labor Party’s needs while avoiding taxation,” Ražinskaitė told Žinių Radijas radio.

The appeals court let the € 6,800 fine for false accounting stand. Uspaskich said he considers this recent decision as an acquittal.

“I bow before these judges, since they withstood all the pressure and gave people, including myself, hope that justice can prevail in Lithuania,” he told the BNS news agency.

Meanwhile, the Uspaskich family has been actively pursuing business interests in Russia. 15min.lt, with help from Novaya Gazeta, identified a chain of recently established businesses in Russia, owned by Uspaskich’s children from his first marriage, Yuliya and Eduard.

Uspaskich has previously failed to report business interests in Russia. He owned a Russian company, OOO Sirius, for nearly nine years between 2002 and 2011. Although declaring ownership by candidates and elected politicians is mandatory in Lithuania, Uspaskich never disclosed this connection.

“I can’t recall when I had them [the shares]. Maybe I did. But I did hand over the power of attorney, I let the others manage it,” Uspaskich told 15min.lt.

Since 2011, his children Yuliya and Eduard took over the Russian business. In March 2013, a couple of months before his original conviction, Uspaskich gave away most of his Lithuanian businesses as well. His shares at the Vikonda business group were split among his children from both marriages, while his current wife, Jolanta Uspaskich, remained as the largest shareholder.

Simultaneously, what appears to be a Russian ‘clone’ of Vikonda was launched. Starting in March 2013, a network of companies was formed including OOO Vikonda, OOO Vikonda Group, and OOO Vikonda Consulting. Most of the new businesses were established in Rybinsk, a city with a population of 200,000 some 300 km north of Moscow.

Uspaskich’s wife, Jolanta, says the Russian Vikonda has nothing to do with the Lithuanian Vikonda group.  “Vikonda is operating exclusively in Lithuania, even the home office is in Lithuania, instead of a more convenient jurisdiction tax-wise,” she told 15min.lt.

However, she said, she doesn’t object the use of Vikonda’s trademark in Russia.

Uspaskich insists he isn’t involved in his children’s businesses. “You can ask questions on what I own. If I don’t own something – I don’t. If you’re interested in companies where I’m not a shareholder – ask the shareholders,” he said.

Uspaskich, who has made numerous trips to Russia in recent years, says he is not aware if the Russian Vikonda is related to his former business in Lithuania. However, a Russian blogger photographed Uspaskich on stage at the opening ceremony of the Vikonda shopping mall in Rybinsk.

Uspaskich was one of the brightest personalities in Lithuanian politics and formed one of the country’s most successful parties. He was appointed as Minister of Economy in 2004, but one year later had to step down amid a corruption scandal. While he was accused of various misdeeds by his political opponents, his only criminal conviction is the one for false accounting.

The Labor Party is currently in the government and has several ministers. Uspaskich himself stepped down as the party’s leader and since December 2015 is no longer a member. Uspaskich says he is quitting politics.