The other shoe has dropped, as regards the highly private family of Russian Federation President Vladimir Putin.

Maria Vladimirovna Faassen, Putin’s eldest daughter, allegedly lives the life of a very wealthy woman despite a career as a medical researcher, according to an investigation published by Russian magazine The New Times. 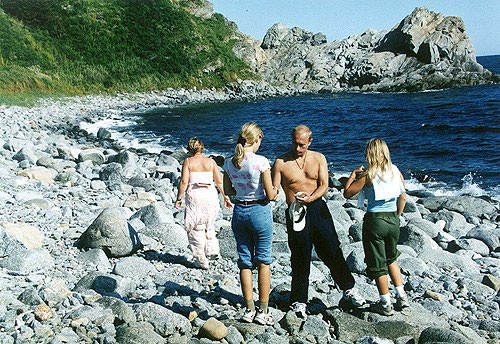 Putin and his family in Primorsky Krai.For years Putin has fiercely guarded the privacy of his family, but last year RBK media group reported that his youngest daughter, Katerina Tikhonova, heads the Innopraktika Fund, which is planning a 110 billion ruble (US$ 1.5 billion) project to double the size of Moscow State University (MSU).

The magazine's website says that Faassen, 29, lives in an apartment block across from the US Embassy in Moscow. Local residents told journalists that a new security regime had been put in place in the area when a “young foreigner” moved into the building, whose birthday coincides with that of Putin’s eldest daughter, according to data obtained by The New Times. A local tenant assumed she was a “tycoon’s wife.”

Faassen studied medicine at MSU between 2006 and 2011 under the name “Maria V. Vorontsova.” She has also used documents under four more different names, reported The New Times. Fellow students refused to speak to journalists about her time as a student at MSU or demanded “fantastic” sums of money. Only one former student, now living  outside of Russia, told The New Times that Faassen was rumoured to be the daughter of a “wealthy general” or the daughter of a “secret missile designer.”

Photos on social media show Faassen lives “the life of a wealthy woman” with “a lot of world travel, riding expensive yachts, and hiring overseas teachers.” For example, Faassen and her girlfriends took a Mediterranean cruise on the luxury mega-yacht Aria with stops at Monte Carlo, Italy, France and Spain.

According to data from the Maritime Register obtained by the reporters, the Aria was built in 1998 in San Lorenzo, and renovated in 2011. It has four cabins for nine guests with crew costs on average of € 8,170 (US$ 8,877) per day.

Faassen is married to Dutch citizen Joost Jorrit Faassen who came to Moscow in 2006 to work for Gazprom as director of business development. By this time he was already seeing Putin's daughter, according to The New Times, although the public was not familiar with him until an incident in 2010 where he was severely beaten by the bodyguards of banker Matthew Urin after an altercation with them on a highway. The guards were all jailed and three of Urin’s banks had their licenses revoked. The prosecutor’s office also appealed the rulings against them in favour of increased prison sentences. Urin has been sentenced in Russia for bank fraud.

The New Times neither specifies the date of the couple's marriage nor when Faassen adopted her husband's name, although she signs her scientific publications under his name. She has also given birth to a daughter, Mary, according to the report.

Faassen is now head of a charity project known as Alfa-Endo funded by the Alfa Group together with a fund to support the development of philanthropy, KAF, to help children with endocrinological diseases.

The Kremlin declined to comment on the story, according to the Russian news site Meduza. The president's press secretary, Dmitry Peskov, said the Kremlin does not comment on any stories relating to Putin's family.