The aid package, however, comes with conditions: Moldova must reform its justice system, fight corruption, sign a draft agreement for a loan from the International Monetary Fund and appoint a new central bank governor. 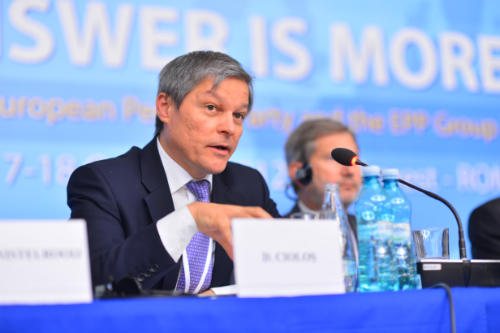 Romanian PM Dacian CiolosThe deal aims to keep Moldova on a pro-European track as the country stands on the brink of economic collapse, prompted by the disappearance of US$ 1 billion from three banks, equivalent to one-eighth of the country’s GDP. Outrage over the scandal united a population normally divided between those who support a European course for the country and those who favor a closer relationship to Russia.

Although the Moldovan government replenished the banks, replacing the missing funds left its own coffers short provoking a mass wave of protests across the country. Demonstrators on the streets of Chisinau expressed anger at widespread corruption and fraud, most of which has been reported by OCCRP partner RISE Moldova.

Last year, Moldovan authorities arrested ex-Prime Minister Vlad Fiat on suspicion he took part in the billion-dollar fraud. He has denied any involvement and claimed the investigation is politically motivated. Fiat is now awaiting trial.

In Bucharest, Romanian President Klaus Iohannis met with Moldova's Prime Minister Pavel Filip. "Romania is clearly by Moldova's side," Klaus said. "We want to support you on your European path and we are convinced that, together, we will find the best ways to do it."

Filip, Moldova’s sixth prime minister in a year, is viewed as a symbol of the country’s endemic corruption, reported the AP. He allegedly has close ties to the country’s richest man, Moldovan oligarch Vladimir Plahotniuc, according to the BBC.

On Jan. 24, more than  20,000 protesters took to the streets calling for him step down but he refused, according to a BBC report. On Jan. 20, Filip’s government was secretly sworn in at night as thousands of protesters stormed past riot police into Parliament hoping to prevent it, reported the Financial Times.

In response to the protests against the new government, this week former Moldovan Prime Minister Ion Sturza publicly posted a warning on his Facebook page to Filip’s cabinet. He urged them to remain accountable to Moldovan citizens.

"Some advice for the Filip cabinet… I believe you're a professional team ruled by principles of integrity,” Struza wrote, “I am also sure that you are aware [of the very respected investigative journalists at] RISE Moldova [...]”

“An avalanche of articles about government members should alarm you. It’s not a joke,” continued Sturza, “You signed a declaration of integrity, even if you've made it at midnight and you changed the version proposed by NGOs. Today this is your responsibility albeit a symbolic one. But everything can change in the future… If you have some problems with the government be sure to leave the cabinet as soon as possible. Otherwise it will be too late."

Although he acknowledged the country’s failure in pushing anti-corruption laws, Filip vowed Moldova’s government would meet Romania’s conditions for the aid.

"If we don't carry on with reforms that are felt in Chisinau and beyond,” he told a joint news conference with Romanian Prime Minister Dacian Ciolos, “this political class has no chance."

This story has been edited to reflect the correct date of the protests.  OCCRP regrets the error.