Hoping to reduce the number of illegal arms and explosives in private possession, Montenegrin police have launched an amnesty program for people to return or register illegal weapons. 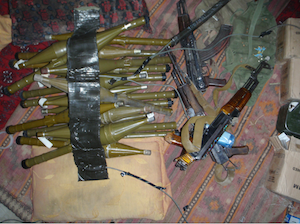 Those who turn in or register such items will not have to document how they obtained the weapons, nor will they will risk criminal penalties of up to five years in prison.

Interior Ministry official Mirjana Boskovic told the Balkan Investigative Reporting Network (BIRN) that the campaign, entitled “Respect life, surrender weapons,” would allow citizens to surrender illegal weapons indefinitely. If they choose to register the weapons, they must do so by March of 2017, Boskovic said.

Data on illegally held weapons is sparse, but it is estimated that Montenegrins own between 40,000 and 89,000 unregistered firearms.

Montenegro has a strong tradition of using and carrying firearms, leading the regional in the number of registered firearms per capita. Consequently, armed crime levels, especially in small towns, are relatively high compared to the region, according to Balkan Insight.

Ambassador Mitja Drobnic, the Head of the European Union Delegation to Montenegro, remarks that “in the long-run, the campaign is designed to raise awareness about the dangers posed by small arms and light weapons.” He said similar campaigns in Serbia and Bosnia and Herzegovina have shown excellent results.