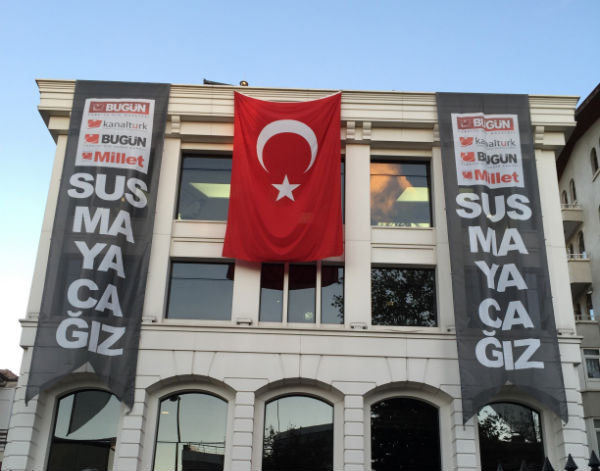 Protest flags on Koza Ipek media group office. According to Tanrıkulu, in 2015, 774 journalists were fired, 484 faced legal action from the judiciary along with 238 additional court cases opened against journalists, 156 journalists were detained, 200 press members and seven media companies were subject to investigation by Turkish authorities, and 32 journalists were currently under arrest.

Tanrıkulu praised reporters on Working Journalists’ Day on Jan. 10 while reiterating words spoken by the President  on the same day:

“Media should be free; to the extent those working in the press, journalists and reporters are free, the democracy of the country will be stronger to the same extent,” Erdoğan said.

But the president also stressed “press freedom should not be confused with irresponsibility,” added Europe Online Magazine. Erdoğan also warned against “black propaganda” disseminated via social media. More than once, Turkish authorities have attempted to shut down social media website Twitter.

Tanrıkulu described the current state of media freedom in Turkey as “bankrupt.”

Erdoğan personally filed charges of espionage and terrorism against the editor-in-chief of Cumhuriyet newspaper, Can Dundar and his colleague, Erdem Gul. The paper is known for its critical stance of the Erdoğan government. The two journalists, detained last year, are awaiting trial, according to Europe Online Magazine.

The Turkish Journalists’ Union (TGS) rallied press associations, political opposition members, civil society groups and journalists across the country for demonstrations in Ankara and Istanbul on behalf of free press yesterday, according to Today’s Zaman.

"We journalists have spent a lot of time in courthouses recently to give statements to prosecutors over alleged crimes, instead of spending our time doing our actual jobs,” said Güseren Ergezer of the TGS in a speech during protests, “Almost every day, Erdoğan's lawyers file a criminal complaint against one of us. Judges are ordered to issue rulings to arrest journalists and over 30 journalists are still behind bars. The only evidence used to justify these arrests is the journalists' news reports."

Turkey has hit new lows in media censorship in recent years according to international organizations monitoring press freedom. The Committee to Protect Journalists (CPJ) highlighted that Turkey had the fifth highest number of journalists in prison, after China, Egypt, Iran and Eritrea. Freedom House ranked Turkey as “not free” in its annual Freedom of the Press report. The country also ranked 149 out of 180 in the 2015 World Press Freedom Index by Reporters’ Without Borders.