Romanian Senator Gabriel Oprea has been involved in questionable real estate deals, according to a story published by OCCRP partner RISE Romania in partnership with the Center for Investigative Media. 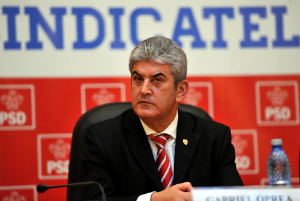 Gabriel OpreaOprea has had a distinguished career in Romania’s military and political establishment. According to the investigation published yesterday, he acquired his fortune through real estate investments made with dubious business partners.

Oprea launched his career as a real estate investor while still in the Romanian army, employed with the Logistics Department Ministry of National Defense in the early 1990s, according to documents obtained by the journalists.

From his post in the Ministry of Defense, Oprea started  a tenant’s association, called GAGE, in 1992 which acquired an unfinished apartment block from the state and he then used soldiers from the army to complete the construction project.

The same group of soldiers constructed the 12-story Casa Poporului in Bucharest, the Palace of the Romanian Parliament. With 360,000 square meters of floor area, it’s the most expensive administrative building in the world estimated at US$ 4 billion, according to the World Record Academy.

GAGE signed an agreement with HAICOR SA, a company controlled by the Romanian Army, which agreed to complete the construction of the apartment block.

Colonel Mihail Bartos, who claimed he was not directly involved with HAICOR, told the journalists that the company was established with the aim of bringing some extra money to the Ministry of National Defense.

In order the finance the venture, Oprea established business partnerships with individuals and companies with controversial pasts. In return for the money invested into the project, investors would be given apartments in the block.

Documents from the Ministry of National Defense revealed the cost required to complete the building was 34 million lei (at the time US$ 8,947).

Oprea’s investors and business partners included a Lebanese national, Hussein Hassan, an alleged drug trafficker linked to Russian spies; MCS Import-Export, a company that had been convicted for tax evasion and money laundering; IMUT Moreni, a state company that did business with Russian oligarchs; and RODACOM SRL an Italian company which one of its founders, Ciaffei Ciro, was tried in Italy for human trafficking.

Although Oprea has since held political positions as an MP for the Social Democratic Party (PSD), a senator for Bucharest, multiple posts as the former minister and Interim Prime Minister of Romania, he is still president of GAGE.

Oprea also persuaded Romanian courts to make residents of his apartment block exempt from tax and from paying the annual concession fee to the state.

Oprea’s press office responded to the report claiming everything that took place in regards to the apartment block was legal. They said, "Regarding the request for information [on] UNPR president, Mr. Gabriel Oprea, the building block T1B, we notify the following: In 1992, works to block T1B were made ​​[by] a military unit specializing in construction, [and] based on a legal contract all invoices are paid services rendered."