Two men were shot in the legs in the Bulgarian capital Sofia on Monday when police say a security guard opened fire near a busy thoroughfare. The two victims were treated at a hospital and are expected to survive. 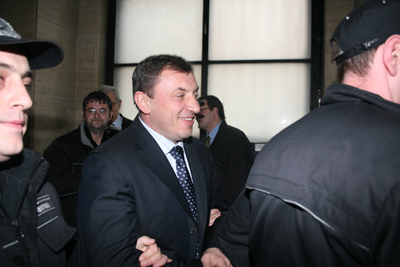 Aleksey PetrovPolice did not identify the victims, other than to say they are 21 and 30 years old and both have criminal records for robbery and assault. Police are reportedly searching for a third person who may also have been shot at.

The reason for the incident remains unclear.

Ivaylo Mladenov, a security guard who told police he works for controversial businessman Alexey Petrov, was arrested and charged with assault and endangering the lives of passersby. He told police that he acted in self-defense after being attacked with fists and kicks after a verbal altercation with the victims.

Petrov told reporters the alleged shooter had no connection to his security staff, although he said he had “some relations” with the security firm the man works for during his unsuccessful 2011 run for the presidency.

Petrov, who is nicknamed “The Tractor,” is a former employee of the Bulgarian National Security Agency who is currently on trial in anti-Mafia court on charges of leading an organized crime group. He told reporters covering his trial that he believed the shooting occurred because the alleged shooter was trying to protect someone from a criminal attack.

“Please, do not attack private security guards; they are the strongest partners of law enforcement in the fight against crime and terrorism,” he said.

The gunfire erupted on the crowded Black Peak Boulevard, near one of the capital’s most popular shopping malls. Petrov’s home and offices are located near the crime scene.

Just over a month ago, a grenade launcher was fired at Petrov’s armored car, heavily damaging it. The explosions caused shock and panic, but Petrov was unharmed and nobody was injured.

He denied he was the target of that attack, labeling it “a mistake.” However, he later offered a large reward for information about the perpetrators.

In 2002, Petrov was injured very seriously in a shooting, which also occurred close to downtown Sofia.