Montenegro’s law enforcement agencies have tightened border security in a crackdown on arms smuggling. The move comes in light of a new report released by human rights organization Amnesty International, according to the Balkan Investigative Reporting Network (BIRN). 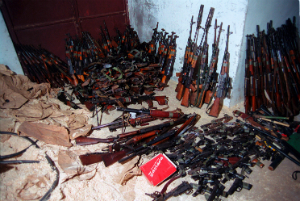 She said that Montenegro’s law enforcement agencies are talking with colleagues in other countries about the report’s findings but noted arms smuggling is not a primary activity of Montenegrin criminals.

Bavaria’s premier, Horst Seehofer, claimed the Montenegrin national, identified only as V.V., was connected to the terrorists who carried out the Paris attacks. Montenegro has disputed Seehofer’s claim, but the political opposition has called for more thorough checks on companies with arms export permits.

Montenegro has often been mentioned in media reports in regards to illegal arms exports to conflict-ridden countries, according to BIRN. The Montenegro Defense Industry (MDI), a former state-owned company, was accused in 2009 and 2012 of illegally exporting arms to Libya and Syria. The MDI denied the allegations.

BIRN reported that 37 companies were registered for arms trading in Montenegro in 2014, along with 10 new companies this year, according to a Parliamentary committee for defense and security.

Assault weapons and small arms sent from countries such as Bosnia and Serbia to Britain may have been purchased by IS fighters, the report said. Moreover, much of the ammunition used by IS is sourced from over 21 countries, including Serbia.

OCCRP previously reported that state-owned Bulgarian National Television (BNT) had a “reliable insider source” from the country’s secret services claiming the Kalashnikov machine guns used in the Paris attacks in November were made in Bulgaria in the 1980s.

It was unclear, however, where they were purchased.

Last month, Bosnia’s Security Minister Dragan Mektic claimed that organized crime gangs in the Western Balkans were coordinating with their French criminal counterparts to smuggle weapons. "For a number of years, there has been a continuous relationship between the Western Balkans and the French Republic in regards to illegal weapons smuggling," he said.

Serbian Interior Minister Nebojsa Stefanovic also said Serbia was cooperating with France in investigating the origin of the weapons used in the Paris attacks, BIRN reported.