Russia: Navalny Vows to Sue Prosecutor General for 'Slander' Amid Denials of Corruption

Prominent anti-Kremlin activist Alexei Navalny has said he will sue prosecutor general Yury Chaika, who said Navalny was a stooge for a third party after the activist published investigation findings about alleged wrongdoing by Chaika's family. 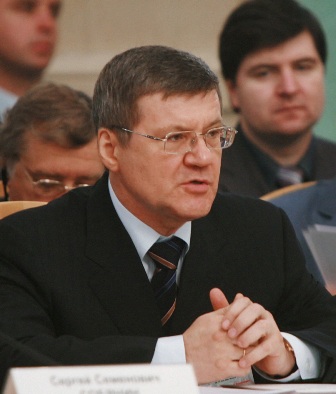 Yury ChaikaThe investigation, released by Navalny's Anti-Corruption Foundation on Tuesday, alleges that Chaika's son Igor, who is the owner of several Russian businesses, was illegally awarded state tenders for construction and development projects.

It also gives details on foreign assets allegedly owned by the Chaika family. It says Chaika's other son Artyom illegally privatized Russian businesses and, with the proceeds, bought a luxury hotel in Greece and a villa in Switzerland.

On Thursday, Interfax news agency reported that Yury Chaika strongly denied the claims. He said Navalny's findings were unfounded, and had been commissioned by a third party.

"It is absolutely clear who and what is behind it," Interfax quotes Chaika as saying. He added he would reveal who he thought was behind it in the near future.

Navalny responded to say he would take Chaika to court to challenge the prosecutor-general to point out "at least one fact" from the investigation "which has not been proven and which can be disproven".

He also wrote that this would be a good opportunity for Chaika to reveal who he thinks ordered the investigation.

Navalny, who is an outspoken critic of the Kremlin and Russian president Vladimir Putin, also posted a 43-minute video containing revelations from the investigation on Youtube.

The video had been viewed more than two million times at the time of writing.

According to the Global Post news website, Putin's spokesman Dmitry Peskov said Wednesday that authorities have not yet had time to read Navalny's investigation.