The former deputy speaker of Bulgaria’s Parliament, Hristo Bisserov, has been found innocent of charges including tax evasion, breaking the law on foreign currency transactions, and submitting incorrect information to the National Audit Office. 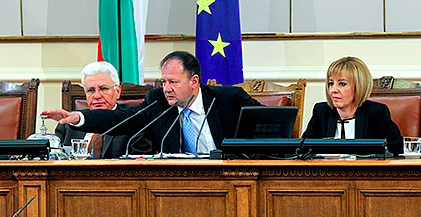 But Sofia City Court acquitted Bisserov of all three charges the next day.

In November 2013, Bisserov abruptly announced that he would step down as deputy leader of the party Movement for Rights and Freedoms, as well as from his senior role in the Bulgarian National Assembly.

Just a few days later, the former official and his stepson Ivaylo Glavinkov were accused by prosecutors of money laundering.

Investigators were given a tipoff by the State Agency for National Security that the two had made suspicious transfers between bank accounts in different parts of Europe.

Media reports suggested at the time that the tipoff originally came from a foreign special services agency.

The allegations caused a public outcry during which the Bulgarian Institute for Legal Initiatives published an open letter saying the scandal exposed the failure of anti-corruption measures in the country.

"Support for Bulgaria's institutions has slumped to a record low as an unprecedented wave of anti-governmental protests are calling for a ‘clean hands’ operation. It is a matter of national security for the authorities to define and implement measures to correct the problems in the system," said the letter, quoted in Novinite.

This past April, Sofia City Court froze about 1.55 million leva (US$ 813,024) in assets linked to the pair but shortly afterwards they dismissed an indictment against Bisserov, saying that the descriptive section of the document was inconsistent, reports news agency BTA.

Prosecutors later resubmitted the indictment and the trial against Bisserov opened on Nov. 30 with the defendant accused of evading taxes of 25,678 Bulgarian leva (about US$ 14,000).

The two other charges were failing to report a large foreign currency transaction and failing to declare about US$ 400,000 held in in Swiss accounts.

Prosecutors said they will appeal the acquittal, which was issued on the grounds of insufficient evidence.