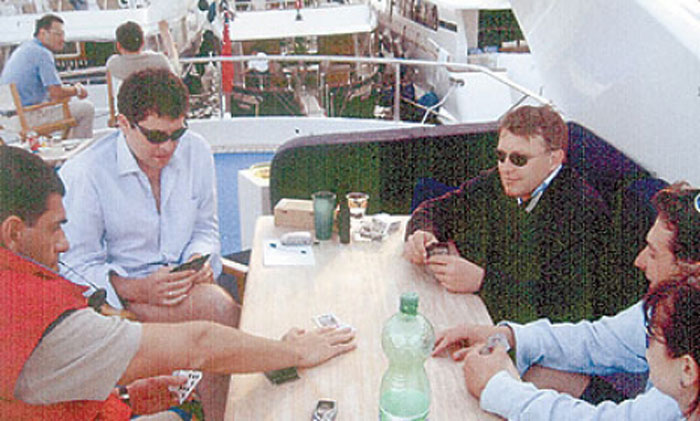 The Nov. 20 auction, lasting close to 16 hours, was organized by Ernst & Young in London on behalf of VTB Capital, the investment-banking arm of VTB, Russia's second-largest bank.

Former Bulgarian finance minister Milen Velchev, who is now the representative of VTB Capital in Bulgaria, said the buyer had agreed to add the restructured debt to the bid amount, meaning the real price is actually € 730 million (US$ 776 million).

The other finalist bidder was the Greek Olympia Group of Greek businessman Panos Germanos.

According to Bulgarian Capital daily, third bidder Mark Schneider did not meet the tender requirements, though he offered € 850 million (US$ 902 million). Schneider owns the cable operator UPC.

The sale was organized after InterV, the Luxembourg-based indirect holding company of Vivacom, defaulted May 22 on VTB Capital’s bridge loan of € 150 million (US$ 164 million). The loan was secured with shares of InterV. Five months later, at the end of October, VTB announced the sale.

Tsvetan Vassilev, the majority shareholder of the collapsed Corporate Commercial Bank (CCB) had a 43 percent stake in Vivacom. Prior to its collapse, CCB was the fourth largest bank in Bulgaria. VTB had 33.33 percent and the rest belonged to a group of telecom creditors led by Michael Tennenbaum, founder of the Tennenbaum Capital Partners LLC hedge fund.

The auction was held despite a rival claim from Russian businessman Dmitry Kosarev, who says he is the actual owner of Vivacom because his company, Empreno Ventures Limited, owns 76 percent of the shares through a subsidiary. He says he will challenge the deal through legal channels.

Vassilev, who is in Belgrade, Serbia fighting extradition to Bulgaria on embezzlement charges, confirms on his own website that Kosarev is indeed the owner. According to Vassilev, the "political Mafia" in Bulgaria is trying to seize the business.

Velchev, the former finance minister, insists the stakes are still owned by Vassilev.

The transaction is said to be monitored closely by the Bulgarian Deposit Insurance Fund, as it had to repay more than 3.6 billion Bulgarian levs (€ 1.8 billion or US$ 3.8 billion) to depositors after the collapse of CCB.

The sale has not yet been officially announced. According to VTB Capital, it will name the winner once a share purchase agreement is signed.

Vivacom is a prosperous company with a healthy balance sheet. It has registered a four percent increase in revenue for the first ninth months of 2015 and has more than 3.2 million customers.

According to Bulgarian Capital daily, the auction had the sole purpose of reselling the telecom at a profit by the end of next year.

Roussev is believed to be one of the wealthiest Bulgarians and amassed his fortune shortly after the fall of the Communist regime.

He started his career as Deputy Director of the Agency for Foreign Aid, the state body that at the dawn of democracy was in charge of receiving, storing, distributing and controlling foreign governments’ humanitarian aid for Bulgaria. It was closed in 2007.

Roussev was advisor to the first democratically elected President of Bulgaria, Zhelio Zhelev, in 1991 – 1992, and later to Simeon Saxe-Coburg-Gotha, the country’s last king, exiled as a child by the Communist regime, who returned to Bulgaria and served as Prime Minister in 2001 – 2005.

According to media reports, Roussev, who has been living in London since 1991, introduced Saxe-Coburg-Gotha to several Bulgarian finance professionals from the City of London who later became members of the former king’s government, including Velchev. The Bulgarian Telecommunications Company, now Vivacom, was privatized during their term in office.

Roussev, himself, had never been active in politics and never held a political office.

His business interests have always been linked to telecommunications; he is co-founder and chairman of one of the most successful Bulgarian and Eastern European IT companies, TeleLink. In recent years Telelink has won a number of public bids worth millions of Bulgarian levs.

According to the site for investigative journalism Bivol.bg, an OCCRP partner, the company provides telecommunication equipment, software, spare parts and consumables for IT infrastructure for the Sofia City Hall, the Registry Agency, the Ministry of Health, the courts and others. Its most impressive winning bid is the one for “integrated monitoring system of the Bulgarian-Turkish border,” won by a consortium of Telelink and Indra Sistemas JSC (Spain).

According to Bloomberg Business, Roussev was the driving force behind numerous privatization and acquisition deals, acting as advisor to foreign investors in Bulgaria such as Motorola, MTG (Sweden), Electrowatt (Zurich), Intralot (Greece).

In 2012, he purchased the upscale Radisson Blu hotel in downtown Sofia, and in 2013, the Sofia Hilton hotel.

In London, the businessman is also known as a philanthropist.

Roussev has also been surrounded by controversy. He referred to as the “right-wing’s oligarch,” and the “gray cardinal” in the Saxe-Coburg-Gotha government and is suspected of past connections with several figures from Bulgarian organized crime such as Ivan “the Doctor” Todorov, Vasil “the Skull” Bozhkov, and Petar “Amigos” Petrov.

After a failed attempt on the life of Todorov in April 2003, when his car exploded on a busy Sofia thoroughfare, a photograph was found among other items in the bombed vehicle.

Its publication in the media sent shockwaves across Bulgaria.

A few days after the story broke, Roussev admitted he invited the people in the photograph aboard his yacht, saying he was sorry for “causing trouble for these guys, who had been attacked in a smear war.”

In 2010, in an interview for TV station bTV, Roussev also said he had arranged a meeting between Todorov and Boyko Borissov, now the Prime Minister, who was at the time chief secretary of the Bulgarian Ministry of Interior.

“This was a mistake. But I was not that close with Ivan Todorov. I can say that I know nearly everyone, but I would not consider the Doctor one of my friends,” said Roussev.

He also told the bTV viewing audience, "I can get any politician in Bulgaria on the phone.”