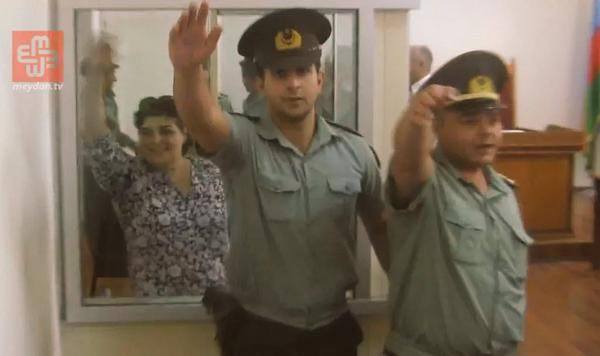 Khadija Ismayilova (left)According to HRW, the award celebrates those who risk their lives to protect the rights and dignity of others.

The prize is named after the late activist Alison Des Forges, famous for her work towards peace and stability in Rwanda after the 1994 genocide.

Ismayilova, an award-winning reporter for OCCRP and Radio Free Europe/Radio Liberty (RFE/RL), was detained by Azerbaijani authorities in December 2014 and accused of a series of charges that many human rights groups say were fabricated to justify jailing her.

In September this year, Ismayilova was sentenced to seven and a half years in prison for embezzlement, tax evasion, abuse of power, and running an illegal business.

She was acquitted of a further charge of inciting a former colleague to attempt suicide.

Ismayilova had reported extensively on corruption in the upper echelons of the Azerbaijani government.

HRW praised Ismayilova’s pursuit of transparency and attempts to tackle corruption in her home country in the face of harassment and smear campaigns.

Ismayilova has won several other awards for her journalism.

In May 2012, she was presented with the Gerd Bucerius Free Press Award for Eastern Europe.

In October the same year, she received the Courage of Journalism Award from the Washington-based International Women’s Media Foundation.

She was given a Global Shining Light Award at the Global Investigative Journalism Conference in 2013 for her reporting to expose the business dealings of the family of Azerbaijan’s President Ilham Aliyev.

The awards didn’t stop when she went to prison.

This year, she was named winner of the PEN American Center’s Barbara Goldsmith Freedom to Write Award, as well as the Anna Politkovskaya Award for corruption reporting.