The founder and leader of Bulgaria’s ultranationalist party Ataka (Attack), Volen Siderov, and a fellow legislator from the same party were arrested Tuesday in an unprecedented move by the country’s law enforcement. 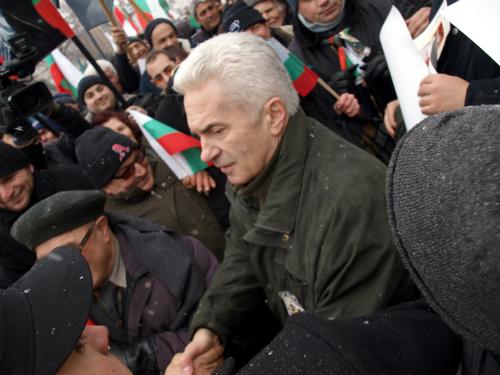 Volen SiderovIt was the first such arrest of two sitting MPs in Bulgaria, following a vote by the National Assembly to remove their constitutional immunity.

Bulgarian prosecutors ordered Siderov and lawmaker Desislav Chukolov to be detained for 72 hours before facing trial on hooliganism and assault charges.

According to the prosecution, the two lawmakers "demonstrate a sense of impunity, are unstoppable, have permanent criminal habits, abuse their official position and behave with an extraordinary degree of cynicism".

The charges stem from an incident on the night after local elections, Oct. 25, when Siderov and Chukolov, along with a handful of supporters and party members, allegedly stormed the building of the National Academy for Theater and Film Arts (NATFA) in Sofia, sparking a brawl.

The allegations say Siderov was subdued by police officers. Interior minister Rumyana Bachvarova and other senior police officials were also at the scene.

Ataka organized a rally on the day of the arrest. Siderov told supporters his detention was politically motivated, masterminded by chief prosecutor Sotir Tsatsarov and Prime Minister Boyko Borisov.

The gathering culminated with supporters waving Bulgarian and Russian flags and chanting: “Volen is a hero.”

Later on Tuesday, the two lawmakers were brought to the Sofia City Court in handcuffs for an extraordinary late-night hearing.

In a decision published at 2am Wednesday, the court ruled that the 72-hour arrest was procedurally incorrect, as there was no evidence that the MPs would commit a new offense, hamper the investigation, or present a flight risk.

The ruling can be appealed by the prosecution, but in the meantime the two men were released on bail.

Siderov was also accused of coercion for attempting to prevent a female NATFA student from taking pictures. However, the Sofia court ruled that there was not enough evidence to charge Siderov with the offense.

Following the National Assembly vote, Siderov and Chukolov immediately announced they would give up their immunity after refusing to do so for several weeks.

If found guilty, the two MPs face up to five years of jail time.

Volen Siderov and the Litany of Controversy

Despite being seen as a nationalist, he professes a deep love for Russia and Russian President Vladimir Putin, while Ataka was the only Bulgarian political party to openly support the annexation of Crimea.

In 2006, he was accused of beating a college student for cutting him off on a highway, and then trying to coerce a fellow party member traveling in the same car to take the rap. Siderov was tried over the incident and acquitted.

In February 2010, he was arrested at Frankfurt airport, accused of causing a scene on board a Lufthansa plane. German police reported that Siderov was drunk, argued with and insulted the cabin crew, calling flight attendants "racist" and "Aryan wives". The investigation was dropped after the nationalist apologized for his rude behavior.

In May 2011, some 50 Muslims were confronted by a group of Ataka supporters led by Siderov while peacefully conducting a midday prayer in front of the mosque in downtown Sofia. Tensions escalated and several prayer rugs were set on fire in the melee.

A number of police officers who intervened sustained injuries. The European Court of Human Rights ruled in March this year that the incident constituted a violation of freedom of religion, criticizing the inadequate investigation into the attack by Bulgarian authorities, which had yet to be completed more than four years later.

Also in May 2011, Siderov allegedly ambushed the then-US ambassador in Sofia during a random encounter in a restaurant, shouting that the United States must pay for the use of military training grounds in Bulgaria.

In March 2013, the nationalist broke the main door of the headquarters of the Bulgarian government when trying to storm a meeting of a caretaker cabinet.

In January 2014, Siderov allegedly confronted and insulted a French cultural attaché while flying from Sofia to the city of Varna on the Bulgarian Black Sea Coast, drawing the condemnation of the French ambassador in Sofia.