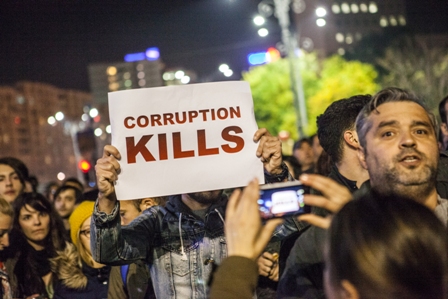 "Corruption kills," shouted the protestersLast Friday, the nightclub Colectiv in Bucharest's District Four hosted a concert that ended when a fire broke out, killing 32 people and hospitalizing more than 100.

The tragedy provoked outcry across the country as critics pointed to poor fire safety oversight and bad management of healthcare facilities as factors in the heavy death toll.

At about 6pm Tuesday, up to 30,000 protesters gathered in front of the University Square in Bucharest before marching to the government building, Ministry of Interior, and District Four's city hall. They called upon Prime Minister Victor Ponta, Interior Minister Gabriel Oprea, and district mayor Popescu Piedone to step down.

Their demands came after it surfaced that the club where the tragedy took place lacked the relevant permits to hold their concert – an allegation Mayor Piedone had previously denied.

All three owners of Club Colectiv were arrested Tuesday and stand accused of manslaughter after failing to let authorities know the true capacity of their nightclub. Applying for the proper permit would in theory have ensured that fire hazard regulations were met.

Holding up signs saying "corruption kills", protesters blamed the fire on the wider environment of graft within the country.

The Romanian government, led by the Social Democrats and Prime Minister Victor Ponta, has been under fire over corruption allegations for some time already.

President Klaus Iohannis, of the National Liberal Party, urged Ponta to resign after prosecutors initiated an investigation into accusations against the premier in June.

They suspected him of 17 offenses of document forgery and of being an associate in a tax evasion and money laundering scheme during the period he spent working as a lawyer between 2007 and 2008.

Ponta allegedly received a total of 181,440 Romanian lei (US$ 44,460) from the law firm Sova and Associates for fictitious legal work that he claimed for using forged invoices. He allegedly later used the money to buy property.

Prosecutors say that through these invoices, the law firm and Ponta evaded 51,322 Romanian lei (US$ 12,576) in taxes.

Ponta denied the allegations, saying they were the result of "unprofessional" prosecutors imagining facts.

However, he resigned from his role as leader of the Social Democrats in July in the face of the allegations. His indictment was announced in September, but he said he still didn't plan to step down as Prime Minister.

After the fire tragedy, however, protesters focused on the theme that the overall level of corruption in the country was putting the lives of citizens in danger.

The protester's concerns were echoed by President Iohannis, who publicly criticized public institutions and authorities for incompetence relating to the nightclub fire.

"We cannot allow corruption to stretch until it kills,” he said on Sunday.

Ponta responded to the protesters demands on Wednesday, announcing that he would step down.

"I hope that the submission of my mandate and the government will satisfy the expectations of those who protested,” he said.

With Ponta's resignation, Interior Minister Oprea (who is also Vice Prime Minister) will also potentially be put out of his job, along with the rest of Ponta's cabinet.

Despite his denial that the nightclub in his district operated without the relevant permits, Mayor Piedone also resigned.

President Iohannis must now name a new interim prime minister, and if Parliament fails to approve his chosen candidate on two occasions, the country will be pushed to hold snap elections.