Prosecutors have detained three owners of a Romanian nightclub where a fireworks accident on Friday killed dozens of people, as officials pointed the finger at each other for failed oversight of the central Bucharest venue. 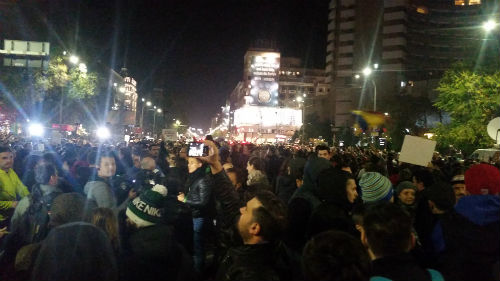 Protests in Bucharest today. Activists held up signs saying "Corruption Kills"Mincu Constantin, 36, Alin Anăstăsescu, 28 and Paul Cătălin Gancea, 28, were taken into 30-day detention today, accused of manslaughter as the death toll from a fire at Club Colectiv rose to 32 and 130 people remained in hospital, of whom 50 were in a critical condition.

Last Friday, the club hosted a gig by local band Goodbye to Gravity to launch their new album Mantras of War. Entrance was free, and doors opened at 8.30pm. According to witnesses and local authorities, stage pyrotechnics used during the set caused fire to break out – to tragic effect.

In the aftermath of the tragedy, critics said Romanian authorities were unprepared and that the incident exposed failures in public systems such as fire safety enforcement.

Raed Arafat, secretary for emergency responses at the Interior Ministry, said the nightclub was operating without the proper fire safety oversight: "The State Inspectorate for Emergency Situations did not give out any authorization or any other form of official document for [events at this nightclub].”

But Popescu Piedone, mayor of the town hall responsible for Colectiv’s operations permit, issued a conflicting statement Saturday saying that all the club’s documents had been in order.

He said: "We have a file with all their documents. We fulfilled all the legal rules for issuing the permit."

Prosecutors now say that the club owners lied about the capacity of the club, saying it was less than 80, to avoid seeking a permit from the State Inspectorate for Emergency Situations. Up to 400 people are thought to have been present when the fire broke out.

President Klaus Iohannis weighed in on Sunday to point the finger at inefficiency and graft: "We cannot tolerate the incompetence of authorities and institutions. We cannot allow corruption to stretch until it kills.”

He added: “We need to be united and ask the authorities to ensure such tragedies never happen again. Dozens of young people and their families deserve our commitment."

Soon after the fire, several club owners in the capital closed their bars for fear that they were not properly protecting customers.

Andrei Șoșa, owner of Expirat Club, complained that authorities had not provided the oversight to prevent him running an unsafe club.

He said: “Since 2003, I have put the lives of thousands of people in danger. Weekend after weekend. And, once in a while, during the week.”

He added: “I took it upon myself to gain a detailed knowledge of the [relevant] laws […] The club functioned on my sole responsibility for 14 years. Did anybody ‘pull off my ears’ in these years?” he said on his Facebook page.

Questions were also publicly raised as to why a multimillion-dollar burns facility, completed in 2010, was not in sufficient working order to treat victims of the fire.

Experts told local media that staffing shortages were to blame for the high-end Floreasca Clinic being out of action.

By Ana Poenariu in Bucharest for RISE Project, an OCCRP partner