Macedonia Must Come Together Now, or Become ‘Balkan Belarus’

Time may be running out for Macedonia’s Euro-Atlantic integration dreams. 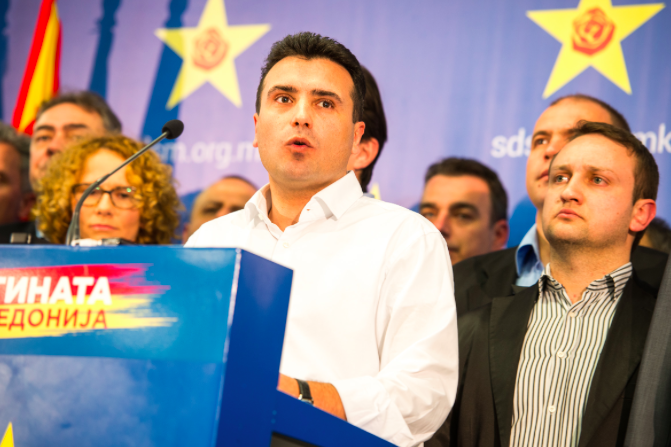 Zoran Zaev, the SDSM leaderA mediator charged with moving the process along says it has stalled because the  country’s two main political parties have failed to implement a political agreement made in June that was intended to resolve this year’s deepening political crisis.

The crisis erupted when the opposition Social Democrats (SDSM) released a series of recordings which they said featured senior politicians discussing acts of corruption.

Zoran Zaev, the SDSM leader, claimed the tapes were the result of an illegal wiretapping scheme ordered by Prime Minister Nikola Gruevski and executed by Saso Mijalkov, his first cousin and chief of the secret police.

Peter Vanhoutte, the mediator appointed by the European Union, warned Wednesday that the agreement would be dead in the water if the SDSM and Gruevski’s ruling party VMRO-DPMNE failed to agree on the key problems by the end of this week.

He said the stalemate could kill plans for early elections in April.

Vanhoutte said that agreements on the key reforms were urgent and that failure could lead to isolation for Macedonia, which has aspired to join the EU since 2005.

“Macedonia may become isolated like Belarus. The country must choose between the Euro-Atlantic course or isolation,”he said.

So far, the biggest obstacles to implementing the agreement are issues related to the prosecution of corruption and other criminal allegations brought to light by the tapes, as well as the organization of an electoral commission.

The mediator said Macedonian institutions were hindering the work of the newly appointed Special Prosecutor, whose job it is to investigate claims of mass surveillance by the government as well as the alleged crimes of officials discussed in the wiretaps.

Vanhoutte chastised officials for their apparent reluctance to get to the bottom of the scandal.

“I am deeply concerned. We are not blind. We see everything that is happening. We are very concerned about the courts and their willingness to show that they are independent. Some institutions and some people behave like they are above the law,” he said.

Meanwhile the ruling party has attempted to pass a law banning the publication of the alleged wiretaps, which have been called “bombs” by the media.

VMRO-DPMNE issued a first draft of the law two weeks ago, according to which domestic and foreign media, social media and any person speaking in public would face criminal charges if they mentioned the tapes or the material contained in them.

The draft was later withdrawn, but the ruling party has insisted such a law should be pursued in another format.

Vanhoutte accused them of wasting time with the demand, and said censorship must not be introduced.

“Freedom of expression is non-negotiable. The media has the right to publish everything that is in the public interest,” he said.

Adding further urgency to the need for resolution, the deadline expired Tuesday for the appointment of ministers from the opposition to a transitional government to lead the government until the proposed early elections next April. But none has been appointed.

According to June’s agreement, the opposition is entitled to appoint officials to the Ministry of the Interior and Ministry of Social Affairs, while Gruevski should resign in January.

Special Prosecutor Katica Janeva said she could be ready to bring the first criminal charges in the case by the end of this year, or at the beginning of next. But her work is moving slowly because the National Council of Prosecution has cut the size of her team by half.

June’s agreement was designed to get the country back on track for European integration. Macedonia’s crisis saw protests the size of which had never been seen in Skopje, as well as a Parliamentary walk-out by the opposition.

Armed clashes in the northern town of Kumanovo in May this year ended with eight policemen dead, 14 terrorists killed and at least 37 officers wounded, police said.The violence worsened an already-tense political climate.