Several thousands people gathered Sunday night for a fresh protest in Podgorica’s main city square to issue an ultimatum to Prime Minister Milo Djukanovic to step down by next weekend or see “the whole of Montenegro” protest in the capital. 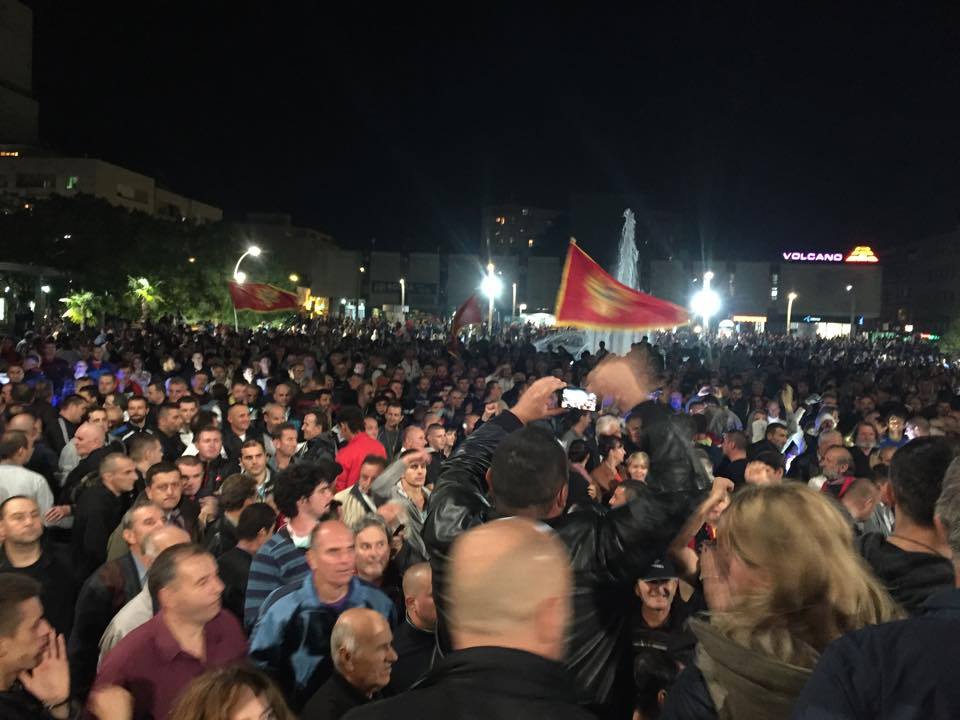 Protestors in Podgorica. Photo: Democratic FrontThe protest, organized by opposition coalition the Democratic Front, was held in response to police action on Saturday that removed a protesters’ camp in front of Parliament amid clashes during which police fired tear gas on activists.

The demonstration - just the latest in nearly four weeks of protests - began with a gathering at which Democratic Front repeated their demands for Djukanovic, whom they accuse of corruption, to resign and enable Montenegro’s first free and fair elections.

Protestors then marched to Parliament, the Ministry of Finance, and the Ministry of the Interior, where Andrija Mandic, a Democratic Front leader, said Djukanovic had six days to step down, or: “The whole of Montenegro will come to Podgorica for a new protest.”

After Mandic’s speech, the protestors began to march back to the main city square.

On the way back to Parliament, a group of masked people attacked policemen guarding the building.

Organizers said the attackers had been sent to provoke crowds and called on protestors to remain peaceful.

Police fired tear gas, and the protestors hurried back to the city square, where the event was peacefully ended.

Earlier Sunday, the EU Delegation to Montenegro issued a statement to say recent events in Podgorica should be investigated in detail. On Saturday, three journalists were arrested amid clashes between police and protestors.

The US Embassy in Podgorica meanwhile “urged all sides to display restraint and respect for the rule of law,” adding that, “while upholding the principle of freedom of assembly, the demonstrations should be peaceful.”

Meanwhile more than a hundred academics and civic activists signed an open letter to Djukanovic’s government and the Ministry of the Interior condemning Saturday’s police action and the use of force against protesters.

Amid the escalating standoff, President of the Parliament Ranko Krivokapic called on the leaders of the Democratic Front to return to Parliament and seek solutions for problems through the country’s institutions.

Later on Sunday night Prime Minister Djukanovic held a session of the Council for National Security of Montenegro.

In the press release that followed, members of the council expressed their support to all government institutions that are working on the “preservation of the democratic values of Montenegro, integrity and freedom of its each individual citizen”.

They also said that political dialogue on all of the issues “should be continued within democratic institutions”.

By Dejan Milovac in Podgorica