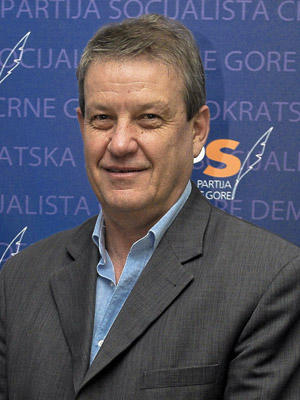 Zarko PavicevicMontenegro's special prosecutor for corruption and organized crime issued an arrest warrant today for the former mayor of the coastal city of Bar, Žarko Pavićević, on suspicion of continued abuse of office linked to his private construction company.

The arrest was made this morning as Montenegrin police detained both Pavićević and Danijela Krković, the former executive director of his construction company Zavod za Izgradnju Bara (Institute for Construction of Bar).

Žarko Pavićević is a high-ranking politician in the ruling Democratic Party of Socialists, which has been in power for 25 years in Montenegro and is currently led by Prime Minister Milo Đukanović.

An investigation into Pavićević has run for several years since the non-profit anti-corruption organization MANS submitted a criminal appeal against him and several of his connections in 2011.

MANS, an OCCRP partner organization, had carried out research into Pavićević and his firms in connection with several business deals made with the city administration and people supposed to be foreign investors.

In MANS's 2011 criminal appeal against Pavicevic, they also named the Minister and secretary for Urban Development, the director of the Montenegro's national post office, and several investors suspected of benefiting from Pavicevic’s alleged malpractice.

Pavicevic has not yet commented to the media on today's arrest.

Pavicevic’s is the latest in a series of arrests of officials made by the special prosecutor’s office since the beginning of the summer.

The crackdown comes ahead of a new European Union (EU) progress report, expected in October or November this year.

Montenegro faces continued scrutiny from the EU, which has remarked on the need for the country to invest more effort fighting corruption and organized crime – both seen as the biggest obstacles for joining the EU family.

The country also hopes to receive an invitation to join NATO by the end of this year.