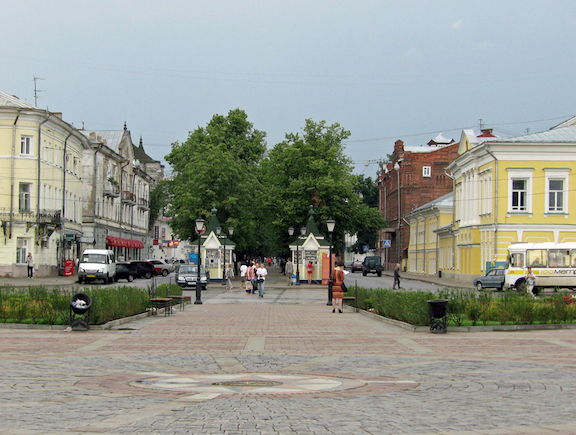 Piece Avenue in Kosroma, RussiaElection watchdogs catalogued more than 1,500 violations in this round of polling according to Golos, a Russian organization established in 2000 to promote fair voting practices.

Citizens were voting in 21 governors, more than 1,300 heads of small city administrators, along with deputies from 11 regional parliaments and 25 city legislatures.

Of particular concern to monitors was a raid by police on an independent observers’ organization in the historic region of Kostroma, 350km north of Moscow.

Staff at Otkrytye Vybory (Open Elections) were reportedly forced to make way for police investigating a murder that authorities said was linked to the premises.

In another incident, a woman was allegedly spotted stuffing the ballot box in the small southern town of Abinsk. A witness said police made no effort to stop the woman.

The Moscow Times reports that in the western city of Nizhny Novgorod a man was offered 500 rubles (US$ 7) to vote for a specific candidate.

The regional elections are seen as a precursor to Russia’s State Duma vote in 2016, as well as the 2018 presidential elections.

Pro-Kremlin candidates have dominated the electoral landscape throughout campaigning and the ruling United Russia party claimed decisive victories in a large majority of the polls.

In some regions, incumbents were reelected with sky-high numbers, according to the Moscow Times.

Aman Tuleyev, governor of Kemerovo for nearly two decades, was reelected with 96.7 percent of the vote, and Rustam Minnikhanov reelected President of Tatarstan with 95 percent.

Governors from other regions, including Penza and Bryansk, reached up to 80 percent.

The strength of Russian opposition parties has declined since current President Vladimir Putin was appointed to a third presidential term in 2012.

Opposition bloc the Democratic Coalition – made up of parties including the late Boris Nemtsov’s Parnas and dissident Alexei Navalny’s People’s Progress Party – was barred in every region except Kostroma for reasons that members claimed were politically motivated.

Once the richest men in Russia, Khodorkovsky was arrested in October 2003 on charges of tax evasion and embezzlement.

A vocal critic of Putin, he spent nearly a decade in prison until his release in December 2013. He now lives in Switzerland.