Moldova: Protestors Call for Return of Missing Billion and Dissolution of Government

Tens of thousands of protesters turned out to a march through downtown Chisinau on Sunday, shouting phrases such as “Bring the billion back home!” and “Down with the Mafia!” 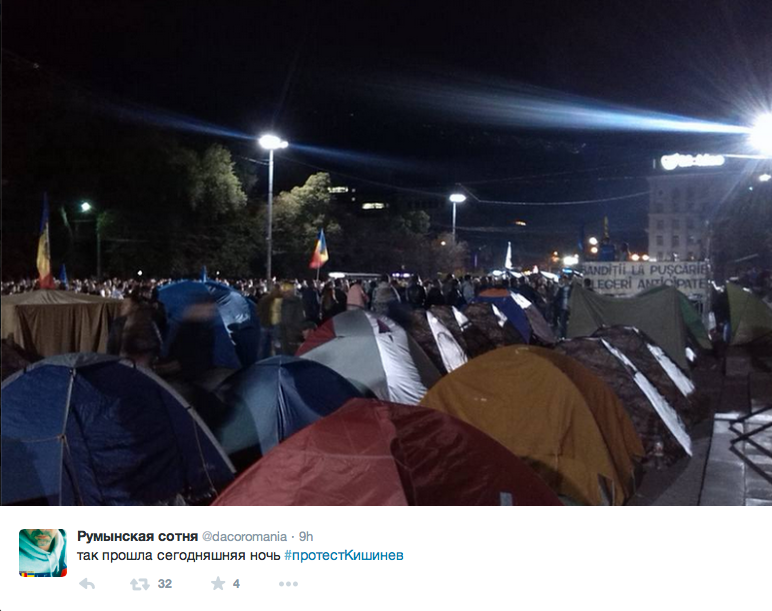 A photo of the encampment tweeted by protesters.The demonstration, which was reported to be the largest ever in the small former Soviet state, called on President Nicolae Timofti to resign and demanded a full, impartial investigation into the disappearance of up to US$ 1 billion from three Moldovan banks in 2014.

Protestors also demanded early elections and accountability for November incident in which, through a series of fraudulent loans and transfers,US$1 billion was stolen from three of Moldova’s largest financial institutions.

The audacious theft, which was finally made public in April this year, amounted to an eighth of the country’s total GDP and left it in political turmoil.

Police estimate that between 35,000 and 40,000 people attended Sunday’s protest, although the demonstration’s organizers claim the turnout was three times that figure, reports VICE News.

The next day, protesters erected about 40 tents in a main square. The campers say they intend to stay put until the current government is dissolved.

An encampment was also set up outside the prosecutor general’s headquarters as protestors called for him to quit.

Clashes with police broke out at the scene, resulting in the detention of several people and one woman being taken to hospital.

Organizers said they would provide food and tea for the camping dissidents. Their presence is intended to act as a reminder of the unsolved fraud.

Moldova has attempted to position itself for European Union membership in recent years but the embezzlement scandal and subsequent protests do not bode well for progress.

The International Monetary Fund and World Bank has suspended money-lending to the country, thrusting it into recession.

New Prime Minister Valeriu Strelet pledged to uncover and hold accountable the thieves when he took on the role in late July, but protestors claim he has not done enough.