Serbian authorities have arrested three people suspected of involvement in large-scale migrant smuggling after they found 90 people in a house in Belgrade on Tuesday. 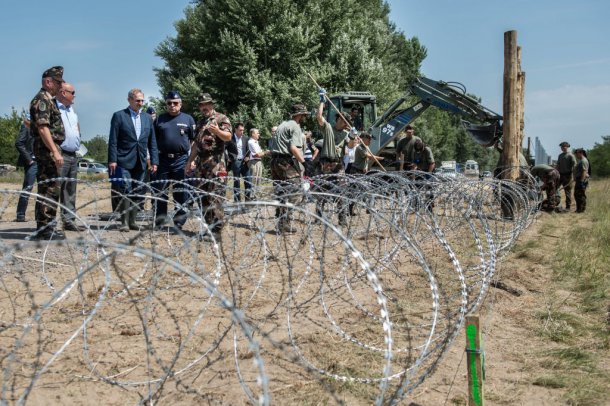 Construction of the Hungarian border fence The three unnamed suspects were held on 48-hour detention orders. The arrests follow several border busts this month also linked to the illegal smuggling of migrants.

An apparent surge of people smuggling in the country recently could be linked to the construction by Hungary of a four-meter high fence along its border with Serbia, according to Rados Djurovic, head of Serbian NGO the Asylum Protection Center.

On July 18, Djurovic told Serbian state television (RTS) that the news of Hungary's vast wall, which is to be completed by the end of August, had spread through networks of migrants and that those hoping to make it into the European Union (EU) were now scrambling to reach Hungary as soon as possible.

Meanwhile, for smugglers themselves, there remain plenty of opportunities to increase profits.

Djurovic said that migrants traveling through Serbia on their way to Europe from North Africa and the Middle East spend about six million euros (US$ 6.6 million) per day between them.

A lot of this money, however, often ends up in the hands of criminals since many people are afraid to go to the police or use legitimate hostels and transport in case their documents are checked.

This concern is shared by the United Nations Refugee Agency (UNHCR), which fears that the fence will "in fact serve only to push people into the hands of smugglers and traffickers".

The UNHCR states that, of the 61,000 asylum applications Hungary received within the first six months of 2015, about 80 percent were from those fleeing conflict zones such as Syria, Afghanistan and Iraq.

UNHCR spokesperson Babar Baloch told Radio Free Europe/Radio Liberty (RFE/RL) that the situation had been mislabeled by European politicians trying to free themselves of responsibility to care for people in need of international protection.

He said it was not a migrant crisis, as European politicians have called it, but a refugee crisis.