The European Commission has approved € 2.4 billion ($2.6 billion) funding to European Union (EU) member countries as they attempt to manage the impact of the increasing numbers of people migrating from North Africa and the Middle East. 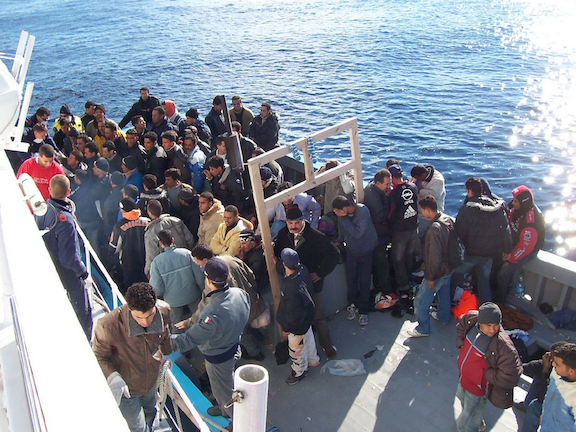 Just over half of the budget, to be spread over the next five years, will be spent on border policing and security, including action to combat human trafficking gangs; whereas a smaller portion will be directed to projects for the reception, integration and return of migrants to their home countries.

However, the skew of funding towards border security and return programs has drawn criticism from migrants’ rights groups, who have branded the EU’s strategies short-sighted.

The Commission’s giant cash injection will mostly be funneled into national programs under two budgets: the Internal Security Fund (ISF) and the Asylum, Migration and Integration Fund (AMIF).

ISF programs to monitor and police national borders account for € 1.21 billion (US$ 1.31 billion) of the pot, whereas AMIF programs – which deal with migrants once they have arrived in a member country – will receive € 1.05 billion (US$ 1.17 billion).

Hungary, Bulgaria, Romania and Austria – all transit countries for those who wish to migrate to the richer countries of Western Europe – will also collect tens of millions to bolster border security and support their border police.

In a press release from the European Commission released Monday, a table of funding allocations showed that more than € 101 million ($113 million) is designated for “specific actions” in 14 member states. The European Commission did not respond to OCCRP’s request for a detailed breakdown.

Meanwhile, migrants’ rights groups are concerned that the funding may only offer short-term solutions. In the wake of a sharp rise this year in people attempting to cross from North Africa and the Middle East to EU member states, some human rights experts have noted the catch-22 faced by would-be migrants.

Those facing conflict in Syria or repressions in Eritrea cannot apply for asylum in Europe while they are still in their home countries; so they are forced into the arms of human traffickers who charge exorbitant fees and take liberties with their safety, bundling them into overcrowded boats or lorries.

Policy at the national and EU levels has taken aim at dismantling trafficking groups and making it physically harder for migrants to evade border controls, but more is needed, say experts.

She said that reintegration programs noted in EC press releases often comprised of sending migrants back to their home countries – many of whom came from environments of extreme hardship such as war or famine, and risked their lives to make a journey to safety.

“We are very critical about these because they serve the purpose of discouraging migrants from migrating,” she said. “There has to be a balance there.”

Meanwhile, EU member states have bickered over who should bear the resource costs of migrants once they arrive.

Hungary has urged its EU partners not to return to them any migrants who traveled through its borders to reach other countries. Meanwhile, it plans to complete a four-meter-high (12 feet) fence along the border with Serbia by November to prevent those attempting to pass illegally at the Serbia-Hungary crossings.

The migrants themselves continue to face danger in the course of their travel.

Last week, nearly 600 Libyans faced catastrophe as they tried to cross the Mediterranean Sea and their wooden boat capsized.

Around 400 migrants were rescued, but at least 25 died.

Since the start of 2015, French officials have intercepted more than 37,000 who were hoping to enter the United Kingdom through Calais, a bottleneck for people trying to reach England through the Eurotunnel without the proper documents.

Thousands of migrants have tried to get into the tunnel, resulting in several deaths in the past few weeks.

Most recently, a Sudanese man was hit by a truck, making him the ninth person to die in July.