Azerbaijani journalist Rasim Aliyev died yesterday in a Baku hospital after being severely beaten by a group of attackers on Saturday. 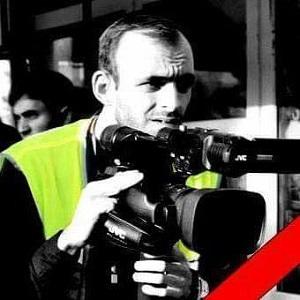 Rasim Aliyev. Photo: Meydan TV.Azadliq Radio, the Azerbaijani bureau of Radio Free Europe/Radio Liberty (RFE/RL), reports that Aliyev had four broken ribs and difficulty hearing in his left ear when he was first admitted to hospital.

His condition deteriorated sharply overnight and, after surgical intervention, he succumbed to his injuries early Sunday morning.

OCCRP partner Meydan TV has reported that Aliyev was beaten in connection with comments he made about soccer player Javid Huseynov.

Earlier last week Aliyev criticized Huseynov, who plays for the Azerbaijani team Gabala FK, for behaving inappropriately in an interview.

Huseynov was questioned by a Greek journalist about an incident that occurred after a game between club teams from Cyprus and Azerbaijan, when Huseynov allegedly brandished a Turkish flag.

When the journalist questioned Huseynov about the matter, Huseynov allegedly made a dismissive hand gesture and said that Turkey and Azerbaijan were friends.

Aliyev reportedly wrote later on his Facebook page: “I do not want someone this amoral, impertinent and unable to control himself, (to) represent me on European soccer fields.”

Talking about the attack to Meydan TV from his hospital bed, Aliyev said that after he posted the comment on Facebook, he received an angry phone call from Huseynov’s relative who shouted and swore at him.

Husyenov himself then called, saying that he had not meant his response to the Greek journalist to be offensive.

A short time later, Huseynov’s relative called again to apologize and asked Aliyev to meet him to talk things over.

After arriving at the agreed meeting place in the Sabail district of Baku, Aliyev said he felt a blow to his left ear and then fell to the ground.

He said he was then beaten by six people for about 30 to 40 seconds.

Aliyev claimed he then called the police, but “they didn’t do anything”.

A press release from the Ministry of Internal Affairs and the office of General Prosecutor said Aliyev was attacked by “a group of unknown men”, and confirmed that the prosecutor had opened a criminal investigation.

In light of Aliyev’s murder, Gabala FK said yesterday that Huseynov will be suspended until more information is known.

According to Azadliq, Huseynov’s relative has been detained and the identities of the other attackers are known to police.

At the time of his death Aliyev was a freelance reporter, but had previously worked for the media monitoring body Institute for Reporters' Freedom and Safety, which was shut down last year after government pressure.

Its founder, Emin Huseynov, fled to Switzerland in June this year after sheltering in the Swiss embassy in Baku for 10 months.

Azerbaijan is a dangerous country for reporters. Five journalists have been killed since 1992, and many more are subject to persecution by the state.

OCCRP investigative reporter Khadija Ismayilova, whose trial is currently underway, has been imprisoned since December 2014 on charges that human rights groups say are politically motivated.

Azerbaijan president Ilham Aliyev (no relation to victim) has “taken the investigation under his personal control” according to Ali Hasanov, the President’s assistant for Public and Political Affairs.