Report: Azerbaijan, 3 Others Most Corrupt Countries in Europe and Central Asia

A new report places Azerbaijan in a four-way tie with Russia, Turkmenistan and Uzbekistan as the most corrupt countries in Europe and Central Asia. 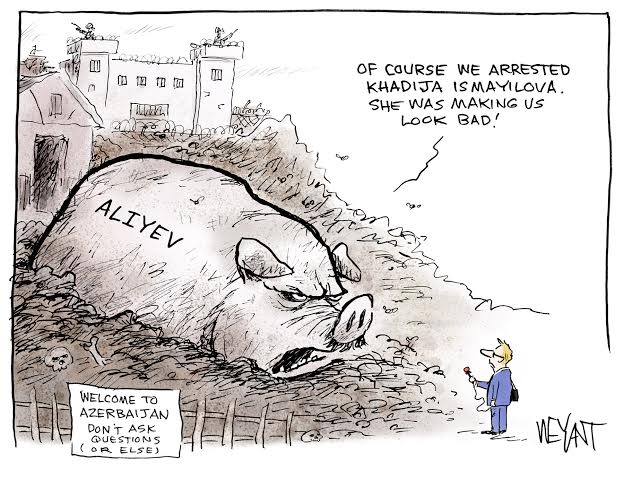 Image: PEN America: A Journal for Writers and ReadersThe annual report, released Tuesday by democracy watchdog organization Freedom House (FH), gave each of the four a score of 6.75 for corruption on a scale of one to seven- with one representing the highest level of democratic progress and seven the lowest.

The watchdog group assessed the democratic progress of 29 Eastern European and Central Asian countries in 2014 based on electoral processes, status of civil society and independent media, democratic governance, judicial systems and corruption.

Its corruption score is based on public perceptions of corruption, business interests of top officials and anticorruption laws and mechanisms.

In addition to its abysmal corruption rating, Azerbaijan received a poor overall democracy score of 6.75 on the seven-point scale, outdone only by Turkmenistan and Uzbekistan who both received the lowest scores of 6.93.

Last month, Azerbaijan hosted the first ever European Games in an attempt to boost its international profile, but the event was marred by widespread reports of corruption and human rights’ violations by President Ilham Aliyev’s regime.

In its analysis, FH also mentioned imprisoned Azerbaijani OCCRP reporter, Khadija Ismayilova, “whose investigations into the Aliyev family’s finances had made her a target of informal reprisals for several years.”

Ismayilova, who reportedly extensively on corruption in the highest echelons of the Azerbaijani government, was jailed in December 2014 on charges that are widely considered bogus. Amnesty International has declared her a prisoner of conscience.