Albanian authorities have made eight fresh arrests in their ongoing struggle to control a marijuana-growing enclave in the south of the country. 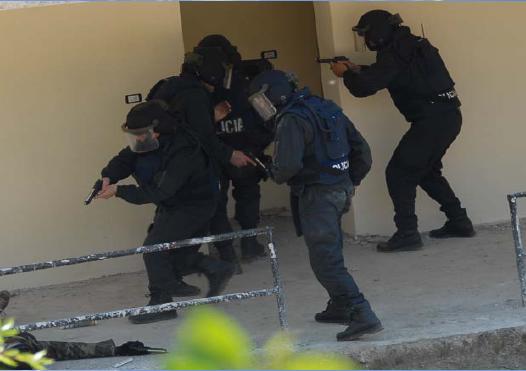 Albanian PoliceA fresh crackdown on the village of Lazarat began on Jun. 24 when members of an armed group shot dead a law enforcement officer. This spurred a police siege that lasted for days and resulted in several arrests.

Police now say they have arrested eight more members of the armed group on Saturday, including brothers Arban and Arbion Aliko.

In the early morning of Jun. 24th, law enforcement officers stopped a car in Lazarat at a police checkpoint. The passengers were armed. They arrested the driver and seized three rifles, but came under fire from a nearby building. Officer Ibrahim Basha was killed and two others wounded.

About 400 police officers were then deployed to the southern Albanian village to root out the group responsible.

Police raided nearby homes, detaining 14 people whom they suspected of being members of an armed criminal gang. The Ministry of Interior provided a list of 21 wanted persons.

The 5,000-resident village has been under police siege since the day of the shooting, with checkpoints registering anyone entering or leaving.

It is not the first time authorities have attempted to tackle criminality in Lazarat. In June 2014, the village was the scene of a five-day heavy-weaponry shootout between locals and hundreds of police officers during a crackdown on local marijuana production.

The Guardian reported that Lazarat is "believed to produce about 900 metric tonnes of cannabis a year, worth about €4.5bn [about US$ 5 billion]  – just under half of the small Balkan country's GDP, according to the interior ministry".