Report Claims Corruption Within the Albanian Justice System Is Endemic 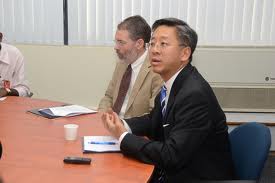 Ambassador Donald LuCorruption within the Albanian justice system is entrenched at all levels, according to a milestone report presented on Monday by the Balkan country’s commission for justice sector reform.

Among the most damning findings reported in the dossier is the allegation that judges pay between € 100,000 to € 300,000 (US$ 113,000 to US$ 339,000) to the High Council of Justice in order to secure better posts, such as those within urban areas, where they are able to extract higher sums in bribes.

The report, which analyses the functioning of the Albanian justice system since it was established in its current form in 1998, also claims that there is evidence some judges take bribes from both sides in court cases.

Among the publication’s recommendations is the removal of the country’s president as the head of the High Council of Justice in order to guarantee the independence and impartiality of the courts, and to de-politicize the selection process used to appoint High Court judges.

According to Balkan Insight the report, which was compiled by international and national experts, is based on public perception of the justice system combined with inside information.

The purpose of the report, according to a government press release, is to serve as “raw material” for developing a strategy to address problems in the court system.

The experts’ findings were presented on Monday at the Palace of Congress in Tirana. According to a government press release, the launch was attended by more than 200 guests including the head of the European Union Delegation to Albania.

Speaking at the launch, American ambassador to Albania Donald Lu claimed that the reforms, if implemented, could be some of the most significant since the fall of communism.

Similarly, the head of the OSCE Presence in Albania, Ambassador Florian Raunig, called the report a “milestone for democratic reform”.

The report is the first official publication in Albania to give credit to allegations that judges pay bribes to move to better positions, claims Balkan Insight. The Special Parliamentary Commission for Justice Sector Reform, which produced the report, is expected next to draft legislation to reform the courts.