President of Guatemala Otto Pérez has sacked a clutch of senior ministers as a major political crisis deepened over allegations of corruption. 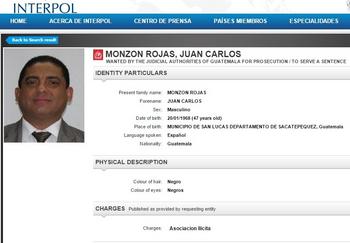 Juan Carlos Monzón, alleged ringleader of the schemeLast month the International Commission Against Impunity in Guatemala (Cicig), a UN-sponsored body of international prosecutors, announced a probe into a multi-million dollar corruption scheme in which bribes were allegedly taken from importers in exchange for lower customs duties.

In a move mirroring recent attempts by other governments in Chile and Macedonia to shore up support after major scandals, Pérez has reportedly asked all cabinet ministers linked to the affair to step down.

Following a string of arrests and street protests calling for justice, agencies in Guatemala City reported that the President had dismissed the interior, energy and environment ministers and the country’s chief of intelligence, among other senior officials.

The sackings follow the resignation last week of vice-president Roxana Baldetti, after politicians began a probe into whether the immunity from prosecution conferred by her political role should be revoked.

The alleged ringleader of the operation was Baldetti’s private secretary, Juan Carlos Monzón, who remains at large.

With elections due in September, observers are concerned that the still-fragile Guatemalan democracy could be under threat.