A biker gang favored by President Vladimir Putin has received 56 million rubles (US$ 1.1 million) in taxpayer funds in the past 18 months, according to documents released by opposition figure Alexei Navalny. 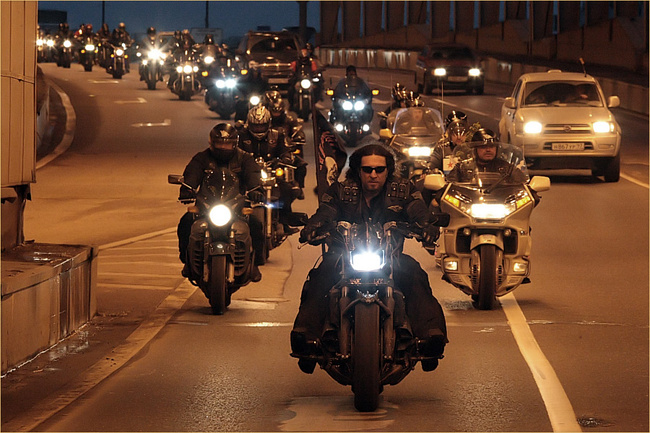 The Night Wolves in motionThe Night Wolves, headed by Alexander Zaldostanov, have reportedly received generous taxpayer support through presidential grants and donations from the Russian Ministry of Culture, in return for putting on patriotic shows.

The 56 million total in Navalny’s report includes a 2014 government grant that appears to have funnelled seven million rubles to the group (about US$ 182,000 in 2014) specifically for "the synthesis of tradition and innovation" and "identification of places of motorcyclists in the spiritual life of Russian society."

The Wolves have met Putin on several high-profile occasions. Zaldostanov has spoken in admiration of the Russian President, and they are said to share a warm relationship.

In a Russian “New Year’s tree” holiday performance (a tradition established in the Soviet era), a Night Wolves character described as being in “Western” style exclaims: “Russia must be deprived of freedom, Slavic peoples need to be chained, peace should be built on their blood, those who disagree must die,” the Moscow Times reports.

According to Navalny, such holiday events are lucrative for the group. The National Charity Fund paid the Wolves 12.5 million rubles (about US$ 325,000 at 2014 exchange rates) to put on holiday performances in 2013 and 2014, according to the Moscow Times.

Night Wolves on the Prowl

The release of the documents comes after the German government announced they would refuse entry to several members of the biker gang late last month. The group had planned to commemorate the 1945 defeat of Nazi Germany by Allied forces by retracing the route of the Soviet Army to Berlin, the Guardian reports.

The cavalcade of bikers dwindled from 20 leaving Moscow on April 25 to only ten arriving in Germany with valid visas on May 3, according to German authorities. The Polish and Lithuanian governments, among others, refused entry to many of the gang’s members, which sparked friction in their relations with Russia.

British TV producer Peter Pomerantsev described the Night Wolves in October 2013: "The Kremlin gives them several hundred million rubles a year and they work to inspire loyalty across the country with concerts and bike shows."

In 2012, the Night Wolves lost a member of their pack during an altercation with rival biker gang Three Roads. The two gangs fell out in September 2012, according to the Telegraph. Russian blogger and leader of the Three Roads, Yevgeny Vorobyev, described the rift: "We just didn't really like the public activity of the Wolves, all that official stuff...Our ideals are music, bikes, free time and girls, after all."