Unfair and opaque lobbying practices have left governments in the European Union (EU) prone to corruption, according to a report released by watchdog Transparency International (TI). 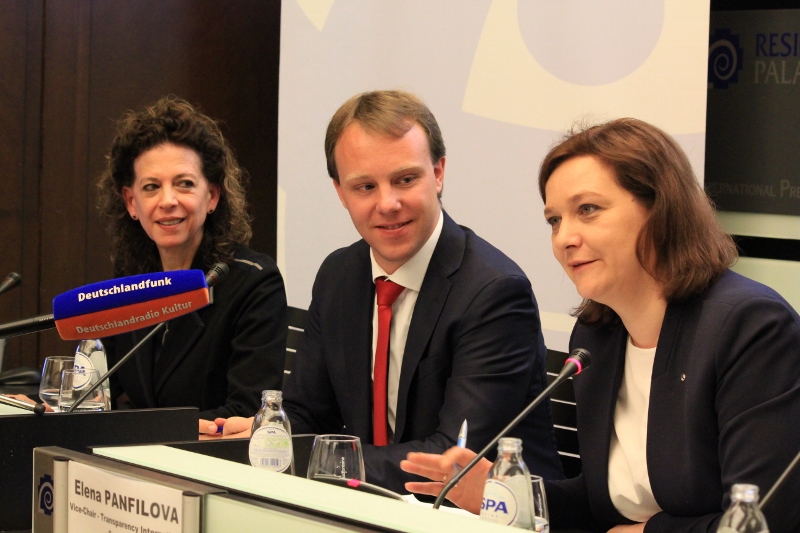 Vice-chair Elena Panfilova and others at the report launch this weekIn the report, released April 15, TI called for urgent regulation reform, warning that the lack of dedicated lobbying laws in 12 of the 19 countries they studied allows for “nearly unfettered influence of business interests” on the daily lives of Europeans. In the seven countries that did have legislation targeted at lobbying, TI found it was frequently ineffective.

Elena Panfilova, vice-chair of TI, said the results of their research were particularly concerning at a time when European leaders were making big economic decisions with far-reaching implications for citizens.

“Those citizens need to know that decision-makers were acting in the public interest, not the interest of a few select players,” she said.

TI analyzed lobbying practices in 19 European countries and the three institutions that make up the EU in Brussels: the European Commission, European Parliament, and the Council of the EU. Each country and institution was ranked on the transparency, integrity and equality of access for pressure and advocacy groups.

Slovenia emerged as the country with the best safeguards against corruption in lobbying with a still-underwhelming score of 55 out of 100, followed by the European Commission and Lithuania. Slovenia was the only country with “cooling off” rules mandating a time period before parliamentarians can move into positions where there is a potential conflict of interest. This measure is thought to reduce the “revolving door” effect, in which former legislators work for firms they had given favorable treatment to, or vice versa – a practice that drew special attention in the report as a particular scourge in the industry.

The study found that the worst offenders for lobbying practices included Cyprus, Hungary, Germany and Portugal. According to TI, 54 percent of Portugal’s cabinet have been bankers since it installed democracy in 1974.

TI also found that the EU’s Transparency Register, a lobbying contacts log operated by the European Commission and European Parliament, fails to provide a safeguard against misconduct since signing up is not compulsory.

A December 2013 review of the register by a working group of the European Parliament promised to make the register mandatory in the future, but this had still not been implemented.

Key recommendations made by TI include the requirement that interest groups and decision-makers have a “legislative footprint” outlining exactly when and why they have come into contact with each other. Other recommendations to the countries and institutions included compulsory cooling-off periods.

The report was met with a mixed reception.

A spokeswoman for Corporate Europe Observatory, a watchdog on corporate lobbying in the EU, said it agreed that a legally-binding lobby register was a must for governments and EU institutions.

“Improved lobby transparency will help us to know exactly who these lobbyists are, who they work for, how much they spend, and what laws and initiatives they are working on,” she said.

Christian De Fouloy, chairman of the Association of Accredited Public Policy Advocates to the EU, said that although he welcomed reforms and stronger regulation, registers were not a silver bullet.

“The reason [some lobbyists] are registered in the Transparency Register is to give themselves recognition and legitimacy. Does that make you a good guy? No, but it adds onto your presentation, your marketing pitch,” he said.

De Fouloy pointed to a need to more clearly define the rights and obligations of both lobbyists and those being lobbied.

"There needs to be a distinction between what is lobbying and what is corruption," he said.