Macedonian opposition leader Zoran Zaev has released a batch of tapes that appear to feature the voice of Prime Minister Nikola Gruevski admitting to fraudulent land acquisition and laughing about the deliberate sabotage of a former ally. 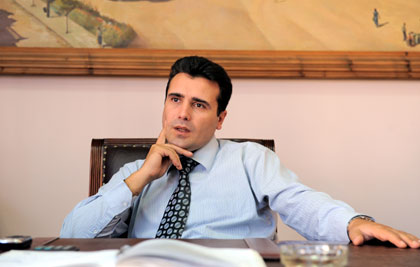 Zoran ZaevOn Monday, at the 13th in a series of corruption-related press conferences that have rocked Macedonia’s government, Zaev played recordings that he claims are of wiretapped conversations between Gruevski and Transportation Minister Mile Janakieski.

According to Balkan Insight, one of the tapes appeared to feature the two men plotting to illegally secure a large plot of land in an exclusive neighborhood in Skopje, the capital of Macedonia.

They also allegedly discussed how Janakieski could expedite a change in the zoning of the land, which was registered as a green space for recreational use, so that it could be profitably turned into a multi-storey development.

Zaev and his party the Social Democratic Union of Macedonia (SDSM) had accused Gruevski of acquiring properties through offshore companies at a media briefing ten days ago. The Prime Minister responded to insist all his real estate has been filed with the State Anti-Corruption Commission, Balkan Insight reports.

Another recording aired on Monday appeared to show Gruevski laughing about how he had lashed out at a former political ally, Fijat Canovski, by shutting down construction on his high-rise project in Skopje with inspections.

According to Balkan Insight, Gruevski appears to say on the tape: "[Canovski] tells me - I can't sleep anymore! I almost felt sorry for him."

The recordings aired Monday are part of a huge cache that the SDSM party says they obtained from a source in the Macedonian secret service.

According to Simonida Kacarska, research coordinator for the European Policy Institute, writing for OpenDemocracy, “[this] wiretapping scandal, for many, signals the existence of authoritarian and likely illegal practices in the country“.

Prime Minister Gruevski has denied all allegations of ordering irregular wiretapping. He claims the SDMS collaborated with one or more foreign secret services to acquire the intelligence and attempt a coup.

The United Nations Office of the High Commissioner for Human Rights called upon the Macedonian government on March 17 to launch an impartial investigation into the wiretapping and the sources of the allegations.