Civilians in eastern Ukraine are being forced to pay bribes equivalent to up to a month’s salary to cross back and forth from disputed territory, reports the Agence France-Presse (AFP). 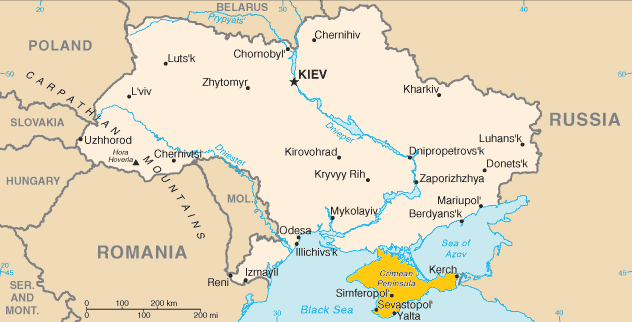 Map of UkraineAccording to AFP, crossing the frontline in eastern Ukraine is nearly impossible without paying multiple officials for a pass, or “propusk”, into the contested eastern region. This reportedly costs about 1,200 hryvnia (US$ 41), which is a fraction less than the monthly minimum wage in Ukraine (about US$43).

Access in and out of the conflict zones – which encompass cities and built-up residential areas – has become increasingly important, especially since Kiev ceased all banks operations in the region in November, leaving ATMs non-operational. AFP, speaking to the acting prosecutor, reported that citizens felt it is easier to pay than lodge complaints against corrupt officials.

Perceptions of corruption were a strong factor in former President Viktor Yanukovych’s unpopularity and eventual ousting. However surveys show that Ukrainians do not believe levels of corruption have fallen since Yanukovych fled the country in February 2014. The former president is wanted in Kiev over embezzlement charges.

Despite a raft of anti-corruption laws passed in October, Ukraine’s new government has yet to either implement them or to establish the National Anti-Corruption Bureau and National Corruption Prevention Agency, which are provided for in the new laws.

Transparency International said in a report on Wednesday that stagnation in the anti-corruption drive owed partly to the fact political parties and media are still dependent on oligarch sponsors resistant to change.