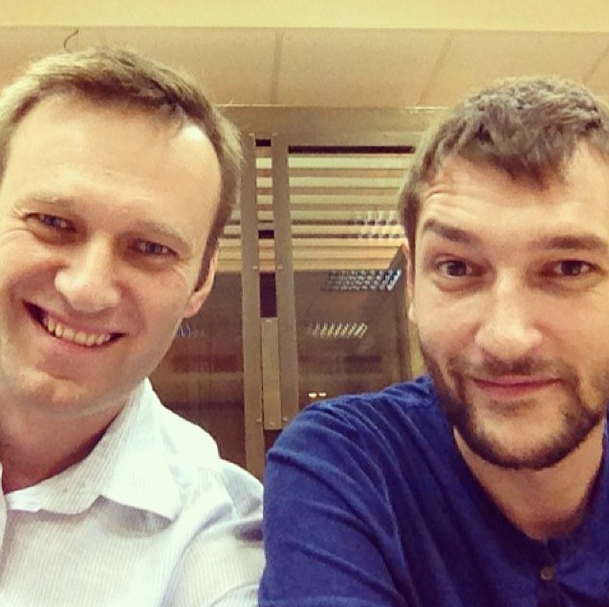 Alexei and Oleg Navalny, eight months agoThe Kremlin critic was sentenced in December 2014 after being convicted along with his brother Oleg in a theft case that has been widely seen as politically motivated. Prosecutors said the pair had stolen 30 million rubles (US$ 480,000) from two companies, including one linked to the French cosmetics company Yves Rocher, by overcharging for postal services provided by their firm between 2008 and 2011.

Alexei Navalny was held under house arrest from before his trial in February 2014 until yesterday. His original prison sentence remains suspended, and he could face jail time if he violates the court's requirements.

Oleg Navalny was jailed for three and a half years in the Dec. 30 decision, and is still in prison. Alexei Navalny claims his brother is being held “hostage” by authorities in an attempt to manipulate his political activities.

Prosecutors at Moscow City Court on Tuesday called for harsher punishments for the Navalny  brothers, demanding a 10-year prison term for Alexei Navalny and eight years for Oleg Navalny.

The judge rejected the prosecutors’ demand but also dismissed an appeal by the pair to overturn their convictions. The court did, however, annul a 500,000 ruble (US$ 8,000) fine due from Alexei Navalny, citing procedural faults.

The dissident’s lawyer said she would appeal the verdict through the Russian courts as well as the European Court of Human Rights to have the suspended sentence revoked, according to Reuters.

Alexei Navalny, who regarded his house arrest as illegal and the sentences as politically motivated, has violated his house arrest on several occasions. He was detained by police last Sunday, Feb. 15, while handing out pamphlets for an anti-government march.

He also removed his court-imposed monitoring tag in January.