Ever received an email that started like this? “It is with a heart full of hope that I write to seek your help in the context below. I am Mrs. Maryam Abacha, the wife of the former Nigerian Head of State, late General Sani Abacha … I have no doubt about your capacity and goodwill to assist me in receiving into your custody (for safety) the sum of US$30M willed and deposited in my favor by my late husband.”

While these “Nigerian email scams” are almost certainly not the handiwork of Maryam Abacha herself, there is a grain of truth in them: General Abacha, the former dictator of Nigeria, stole millions from the state and left the fortune in hidden bank accounts before his death.

Now, some of that money may finally make its way back to Nigeria, after the confiscation of almost a half billion dollars the dictator laundered through the United States. 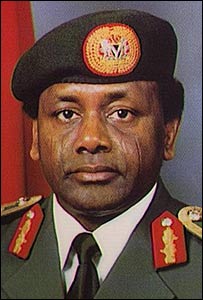 The US Department of Justice (DOJ) and FBI announced on Thursday that, in a decision resulting from a forfeiture complaint filed last November, it has seized at least $474 million of the fortune of the late general from accounts in Jersey, France, the UK and Ireland. Their claims to an additional $148 million in investment portfolios in the UK are pending.

The complaint accused Abacha, who became president of Nigeria in a November 1993 military coup and held the office until his death in June 1998, of stealing billions from the Nigerian government and of laundering the money through US institutions and treasury bonds.

Abacha’s alleged schemes included embezzling funds from the Central Bank of Nigeria, making the Nigerian government buy bonds at inflated rates from a company controlled by his son Mohammed Abacha and associate Abubakar Atiku Bagudu, and extorting a French company with government contracts. The case is the largest asset seizure yet by the Kleptocracy Asset Recovery Initiative, passed in July 2010.

The Nigerian email scam, also known as a 419 scam (referring to the fraud section of the Nigerian Criminal Code), works by persuading a victim to pay one or more “fees” with the promise that this will allow him access to one of the late dictator’s bank accounts that the con artist, posing as a relative of Abacha’s, is unable to directly access.