Yesterday, MANS, a non-governmental organization (NGO) focused on fighting corruption and organized crime in Montenegro, asked the Special Prosecutor for Organized Crime and Corruption to file charges against a dozen high-level Montenegrin officials and First Bank.

The requests come a week after the launch of “Unholy Alliances,” an Organized Crime and Corruption Reporting Project (OCCRP) story that shows the links between Montenegrin government, business, and organized crime.

The NGO is asking prosecutors to examine the activities of Boro Lazovic, Darko Saric and Rajko Kuljaca. According to the Montenegrin newspaper Vijesti, MANS has also requested a hearing with Minister of Agriculture Petar Ivanovic.

Using business records, OCCRP’s “Unholy Alliances” story reports that Lazovic, who is the director of the Mogren football club in Budva, Montenegro, gave away municipal land, which included the football team’s stadium, without the required public tender.

The Montenegrin NGO wants prosecutors to investigate whether a company named Nova Star CG used offshore companies to transfer the land to Saric, the indicted leader of a criminal organization that for years trafficked cocaine from South America into Europe. 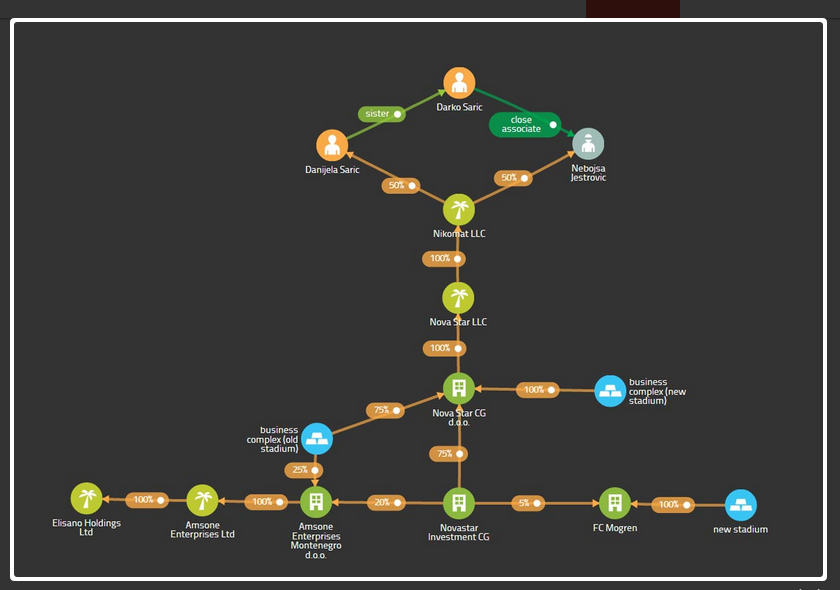 MANS also wants prosecutors to probe whether Lazovic and Kuljaca, a former mayor of Budva who also previously headed the board of the Mogren football club, abused their political powers in this land deal.

Vanja Calovic, executive director of MANS, told OCCRP that is important for the prosecutor to investigate the reach and influence “of drug kingpin Darko Saric within the government structure and members of the ruling political party as there is a serious public concern that the agreement on FC Mogren's land was not the only deal made between the Montenegrin Government and the Saric criminal organization.

MANS is also asking for an investigation into the actions of Rodoljub Radulovic, Serbian businessman Stanko Subotic, and the First Bank of Montenegro, which is controlled by the family of Prime Minister Milo Djukanovic.

According to Vijesti, MANS wants prosecutors to investigate whether First Bank gave loans to companies associated with Saric, Radulovic, and Subotic without proper due diligence in their accounts for Lafino Trade LLC and Camarilla Corporation.

The NGO asked the prosecutor “to open an investigation as soon as possible, and closely examine the First Bank’s transactions and define the nature of the connection between members of Darko Saric’s criminal group and the family of Prime Minister Milo Djukanovic.”