The Bucharest Court of Appeal Tuesday handed down jail sentences for eight executives and management officials, who were found guilty of tax evasion, and money laundering involving the transfer of football players between international football clubs.

Gica Popescu, the former captain of Football Club (FC) Barcelona, was sentenced to three years and one month in prison. The sentence came just a day before the election of the next president of the Romanian Football Association, which Popescu was expected to win.

All sentences are final, with no possibility of appeal.

The corrupt financial deals involved the transfer of 12 players from Romania to international clubs between 1999 and 2005. Prosecutors said the state lost €1.7 million ($2.34 million) in taxes and the Romanian clubs lost €10 million ($13.8 million) because the officials registered false sums for the transfers. 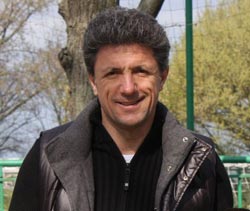 Gica Popescu
After the indictment, OCCRP published an investigation that detailed how the Romanian transfers under investigation were part of a much wider tax evasion and money-laundering scheme. The scheme involved football agents and controversial businessmen in Spain, Romania, Bulgaria, France and Brazil and a maze of companies and offshore havens they used to avoid taxes and fees.

Earlier this month, Rise Project, a partner of OCCRP, reported on Popescu’s affiliation with two Spanish real estate companies implicated in corruption. The former Barcelona defender said, “I have no way of knowing what they’re doing in Spain, nor do I want to know.”

Rise Project also published what would be Popescu’s final interview as a free man a day before he was sentenced. When asked how he felt about the charges against him and his peers, he said, “I am responsible for everything I have done, including this.”

The Romanian investigation began in 2008, after a publication by sports newspaper Gazeta Sporturilor about people who obtained personal gain from transferring players.

Sebastian Bodu, then the head of Romania’s tax administration (ANAF), started an investigation into the financial records of the football clubs; it revealed that only a small portion of the money paid for the players ended up in the Romanian teams, while the rest was deposited into offshore accounts.

BalkanInsight quoted sports journalist Catalin Tolontan as saying, “This is the end of a case that puts football corruption in Romania under the spotlight. Hopefully this will be also the beginning of a new era for the game, but I am afraid the decision comes a bit too late.”

Many Romanian football clubs are nearly broke, with players and staff unpaid for months, according to BalkanInsight.