Transparency International has released its Corruption Perceptions Index (CPI) for 2013. Out of the 177 countries and territories analyzed, Afghanistan, North Korea, and Somalia are perceived as the most corrupt, and Denmark and New Zealand as the least.

The CPI is published by Transparency International (TI), a Berlin-based anti-corruption organization. TI analyzed data published in 13 other surveys and indices to rank and score countries and territories based on how corrupt their public sector is perceived to be. An index score of 0 designates the highest level of corruption, whereas a score of 100 is given to countries “perceived as very clean.” 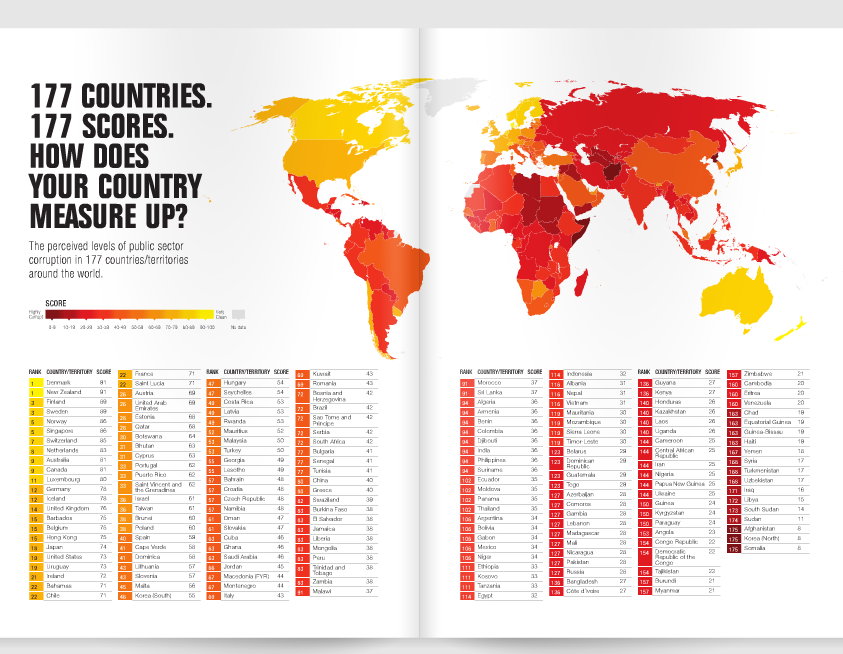 Transparency International gave over two-thirds of the listed countries a score below 50. No country received a score of 100.

Huguette Labelle, Chair of Transparency International, said that the 2013 CPI shows that “all countries still face the threat of corruption at all levels of government, from the issuing of local permits to the enforcement of laws and regulations.”

In TI’s analysis of countries in Eastern Europe and Central Asia, Turkey came out as the least corrupt country, with a score of 50.  It was followed by Georgia (49), Macedonia (44), Montenegro (44), and Bosnia and Herzegovina (42). The countries with the worst scores in the region were Uzbekistan and Turkmenistan, which both had a score of 17. Tajikistan (22), Kyrgyzstan (24), and Ukraine (25) rounded out the five countries perceived as most corrupt in Eastern Europe and Central Asia.

Of all the Eastern European and Central Asian countries listed, 95% received a score below 50. In the EU and Western Europe regional report, only 23% of the countries scored below 50.

Due to changes in the way TI calculates scores, the 2013 report is the first one that can be used to examine CPI score changes over time. Reports before 2012 used relative standings rather than raw data to calculate perceived corruption levels.

This is also the first report that included South Sudan, which, with a score of 14, made it one of the five worst-performing countries.

According to TI, the countries that saw the largest decrease in corruption in 2013 were Myanmar, Brunei, Laos, Senegal, Nepal, Estonia, Greece, Lesotho and Latvia. The countries with the greatest increase were Syria, the Gambia, Guinea-Bissau, Libya, Mali, Spain, Eritrea, Mauritius, Yemen, Australia, Iceland, Slovenia, Guatemala, Madagascar and Congo Republic.