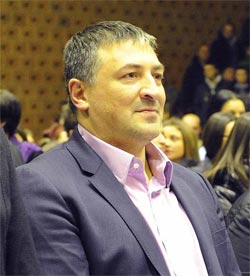 The Serbian anti-corruption agency is looking at the assets of National Security Advisor Ivica Tončev after he failed to report company ownership on his mandatory asset declaration forms. The move by the agency follows a story by OCCRP and the Center for Investigative Journalism in Serbia (CINS) which linked the Prime Minister’s advisor to Branislav Saranovic, an organized crime figure who was murdered in 2009.  Tončev, a public servant, must list all interests in companies but the agency is looking into whether he failed to do that.

OCCRP and CINS conducted an investigation that showed Tončev and Šaranović were business partners. The finances and operations of their joint venture were unclear; the company, Tončev GmbH which was later renamed Fil-Sar, is on the books and Tončev is manager of their Serbian operations. It is not clear whether the businesses were operational.  Premises previously used as company headquarters were found to be in disrepair, and residents in the neighborhoods did not recall any commercial activity taking place at the sites. However, the company shows up in a lawsuit against the state of Serbia to get a casino license reinstated.

The OCCRP-CINS report also highlighted the lack of transparency in relation to Toncev’s income, education, and business: information normally available to the public regarding high profile political figures. Tončev’s ties to Šaranović, who owned a casino in Serbia and was reported to be an advisor to organized crime groups, muddies the waters of Serbian politics further, and calls into question the relationship between organized crime, Tončev, and Serbian Prime Minister Dačić.