The Royal Canadian Mounted Police (RCMP) charged Wednesday three suspected members of a transnational drug trafficking ring linked to a 2022 seizure of 1.5 tonnes of cocaine worth just under CDN$200 million (US$149 million). 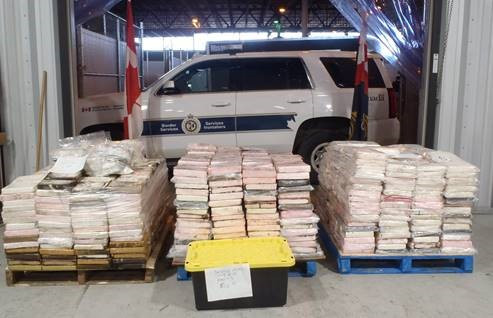 Canadian law enforcement charged Wednesday three of six individuals linked to a 1.5 tonne cocaine bust made last year, the largest in three decades. (Photo: RCMP, License)The cocaine was found a year ago by the Canada Border Services Agency (CBSA) inside of a shipping container as the result of a joint investigation between several Canadian law enforcement agencies.

“This represents the largest quantity of cocaine seized from a marine shipping container in Atlantic Canada in three decades,” the RCMP said.

The investigation, which involved agents from Financial Transactions and Reports Analysis Centre of Canada, the country’s financial intelligence body; an RCMP major crimes task force; and local police departments, began in the fall of 2021 after the CBSA received information about shipping containers from Central America believed to be compromised by organized crime activity.

By December 2021, the CBSA and RCMP had identified a container of interest, ultimately destined for Saint John, New Brunswick. Of note to investigators was that the shipment had been processed by a resident of Brantford, Ontario, a city located almost 1,400 km away from the container’s destination. Two of the suspects are from Brantford.

Border services flagged the container for inspection upon its arrival in New Brunswick in early January 2022. A subsequent search inside turned up more than 1.5 tonnes of cocaine concealed within industrial machinery.

On today’s market, the RCMP said, the drugs would have a street value of CDN$198 million ($147 million).

With assistance from other domestic law enforcement agencies, six people were arrested at the scene. Among them were Kyle Alexander Purvis, 35, Adam Kaup, 42, and Vincenzo Capotorto, 47.  They were charged with conspiracy to import cocaine.

Police have not released the identities of the other three arrested individuals.