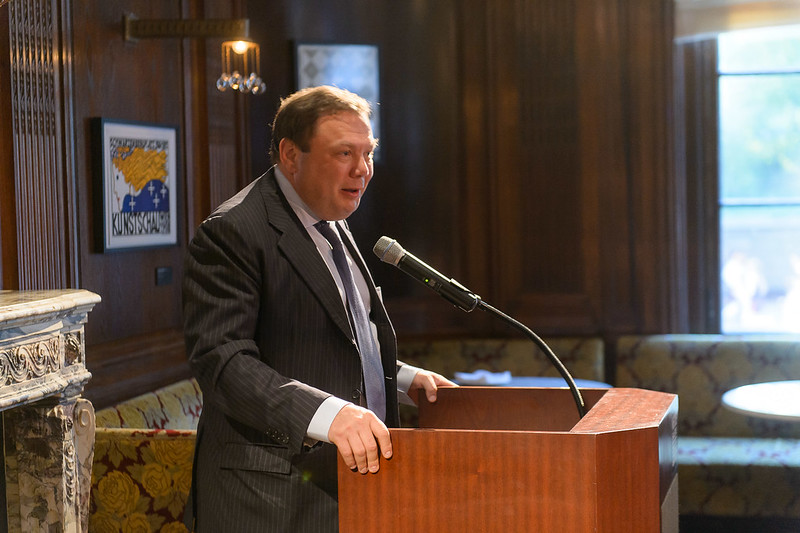 Mikhail Fridman, 58, is believed to be the individual arrested at his multi-million-pound London residence by officers from the NCA’s Combating Kleptocracy Cell. (Photo: LetterOne Group, Flickr, License)Fridman, 58, is under investigation for multiple offenses including money laundering, fraud, and conspiracy to commit perjury. His home was raided by more than 50 officers.

Also arrested was a 35-year-old man allegedly found leaving the scene with a bag containing thousands of pounds in cash; as well as a 39-year-old who was taken into custody at his own London home, also on money laundering and fraud charges.

As the founder and one of the main shareholders of the conglomerate Alfa Group, which includes Alfa Bank, the largest private bank in Russia, Fridman has been referred to as “a top Russian financier and enabler of [Russian President Vladimir] Putin’s inner circle,” according to a report by the Council of the European Union.

The Alfa Group also has interests in oil and gas, asset management, and telecommunications among other industries.

According to the report, Fridman earned Putin’s approval by funding a charity project run by a Putin relative. Putin rewarded Alfa Group’s contributions by providing political help to the conglomerate’s foreign investment plans.

Fridman was one of 26 people sanctioned by the EU last February in response to Russia’s invasions of Ukraine, both the initial attack on Crimea and the current fighting. According to the report, he has worked to reverse Western sanctions against Russia, including traveling to the U.S. in 2018 to lobby on Russia’s behalf.

The Russian oligarch has a net worth of approximately $11.4 billion, according to Bloomberg's billionaire index.

His arrest was conducted by the NCA’s Combating Kleptocracy Cell (CKC), a specialized unit formed in July earlier this year to investigate corrupt elites, those trying to evade sanctions, and enablers of money laundering who hold assets in the UK, specifically those closely linked to Putin and his authoritarian regime.

At the time of the unit’s formation, an NCA spokesperson said that the CKC was a response to the surge in money laundering activity that has taken place since Russia launched its latest illegal invasion against Ukraine back in February.

In the press release detailing Fridman’s arrest, NCA Director General Graeme Biggar said that the CKC “is having significant success investigating potential criminal activity by oligarchs, the professional service providers that support and enable them and those linked to the Russian regime.”

The three individuals have since been released on bail.