It’s going to be a green Christmas for the Spanish Civil Guard this year, as they enter the holiday season fresh off a 44-tonne marijuana bust made deep in the Pyrenees mountain range. 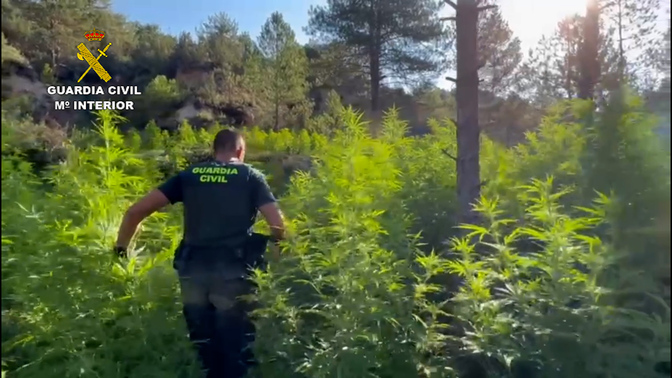 Massive though it may be, the 44 tonne marijuana seizure made by Spain’s Civil Guard isn’t even the largest from this month. (Photo: Guardia Civil, License)In a remote and almost inaccessible area of the Aragonese Pyrenees along the border between France and Spain, police dismantled nine marijuana plantations that together operated as one of the largest growing operations Spanish authorities have ever seen.

All together, the harvest produced well over 44,000 plants intended for the illegal drug trade. Photos from the scene show officers navigating through huge fields of marijuana, with some plants as tall as the officers themselves.

Ten people were arrested at the scene. Police say the conspirators razed parts of the forest to make room for such a massive operation, setting up hose lines from a nearby river to irrigate the crops.

Each plantation was attended by two to three people responsible for crop cultivation, maintenance, and camouflage. The plantations themselves were expertly concealed and required watercraft to even reach them.

Despite their isolation, the caretakers were well disciplined, police said. They consistently operated at a maximum alert level and had planned several escape routes through the forest in the event of discovery.

Some camps were equipped with rudimentary alarm systems.

As isolation was their best defense, the suspects brought with them enough provisions to last up to six months in the wilderness without any contact with civilization. This included food, gas, and work materials needed to cultivate the land.

The investigation, which began back in March, used Civil Guard air units to properly surveil the plantations. For some fields, agents had to hike several kilometers through the Pyrenees to reach the crops without being detected.

On the day of action, marine units were deployed via the river to quickly infiltrate officers into the area and then afterwards exfiltrate them along with the 10 detainees and the fruits of their labor, 44 tonnes in all.

All together, almost 100 agents from the Civil Guard’s sea, air and land units were brought in to man the operation.

In the past 30 days, Spanish authorities have seized well over 100 tonnes of marijuana. This 44 tonne seizure was not even the Civil Guard’s largest in this time period.

In late October, 160,000 marijuana plants weighing 12.6 tonnes were seized, which police say was destined for the transnational drug trade.

The seizure that took home first prize, however, occurred less than two weeks ago, when more than 50 tonnes were discovered across eight plantations in the Catalan region. The 20 suspects, arrested on drug trafficking charges, claimed that they were in fact legal hemp cultivators.

The legal limit in Spain for the possession and consumption of cannabis is 100 grams.