Two French organizations are accusing a former government official responsible for negotiating access to African tuna fisheries of having been recruited by the largest tuna lobby in France. 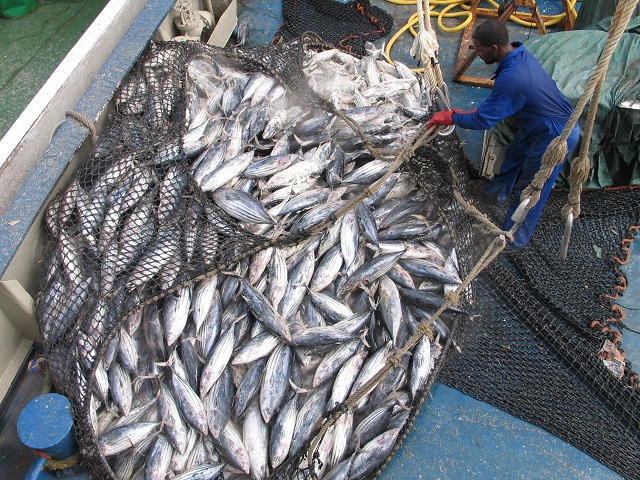 The Bloom Association, a non-governmental organization (NGO) focusing on marine conservation, brought the accusations together with the anti-corruption group Anticor. They believe that the case indicates collusion between the French government and the tuna fishing sector.

For the past five years, the official, Anne-France Mattlet, represented France at the intergovernmental Indian Ocean Tuna Commission (IOTC), according to her LinkedIn profile. She did not immediately respond to OCCRP’s request for comment.

The IOTC regulates and monitors tuna fishing in the Indian Ocean to ensure nobody takes so many fish that the population cannot replace itself.

Mattlet left the administration in March of this year and was subsequently appointed director of the Europêche Tuna Group, which lobbies for the interests of European fishermen.

This timeline appears to be illegal, as French legislation mandates a three-year gap between government service and performing similar activities in the private sector.

In addition, Mattlet’s appointment is limited to a period of one year, after which she is expected to return to the French administration. “This means the official was effectively put at the disposal of the lobby by the French government,” Science Director at Bloom Association Frédéric Le Manach told OCCRP.

The French tuna industry does not have a good reputation.

French industrial fishing vessels operating in the Indian Ocean were, along with Spanish vessels, accused of significantly contributing to bringing local tuna stocks to the brink of collapse through overfishing. They were also implicated in illegal fishing.

In an attempt to revive the Indian Ocean’s tuna population, the IOTC in 2016 introduced tuna catch limits.

According to Le Manach, the measures meant that French fishermen would have to reduce their tuna catches, so in 2015, as soon as the plan became known, they lobbied the French government for an exemption from the EU rules requiring fishing vessels to declare their catches by species to ensure compliance with the catch limits.

The French exemption allowed for misreporting what kind of fish they were catching, thus permitting them to exceed the IOTC catch quotas. However, the European Commission found the exemption unlawful and opened an infringement procedure against France last June. In September this year, the Commission threatened to take the matter to court unless France complies with the EU law by the end of November.

Le Manach indicated that the timing of Mattlet’s transition was not coincidental. “We believe that the official was placed in Europêche by the French government to avoid prosecution by the Commission against France,” he said. The government might have opted for the strategy of empowering the fishing lobby because of the “incredible financial resources and the reach they have in Brussels and Strasbourg.”

In a press statement, Europêche described the accusations as “a slanderous disinformation campaign conducted by activist NGOs.” It said that the nomination was approved by the ethics commission and that the sole motivation behind it was Mattlet’s desire “to contribute to the definition and implementation of European policies that are more in line with the realities of the sector.”

Updated versions: Bloom Association intentionally omitted the identity of the official in question. OCCRP found who the official was from Europêche’s press release.