Algirdas Komskis, the son of Kęstas Komskis, the former deputy speaker of the Lithuanian parliament, has been convicted of embezzlement, fraud and intentional bankruptcy based on an investigation by OCCRP’s Lithuanian member center Siena. 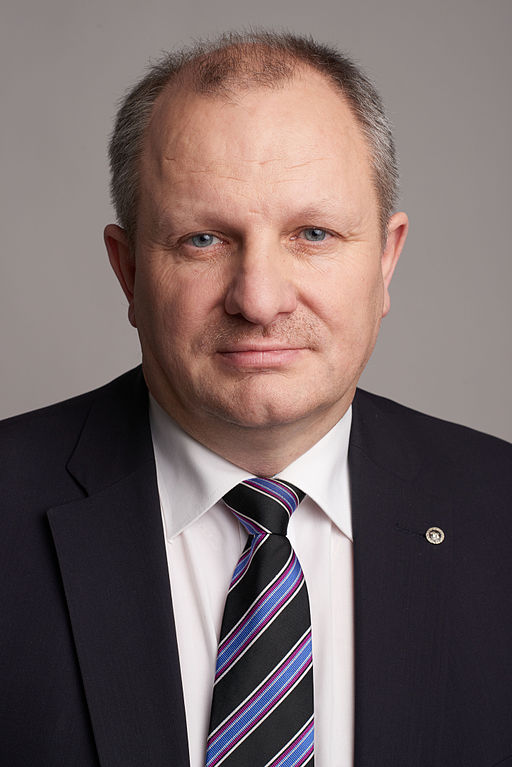 Kęstas Komskis, former deputy speaker of the Lithuanian Parliament, was allegedly involved involved in shady businesses with his son Algirdas. (Photo: Nc0de, Wikimedia, License)On Nov. 17, the court ruled that Komskis intentionally ran his father’s business into the ground to avoid paying hefty damages to two small children who lost their father in a car accident caused by Komskis’ employee, who was driving drunk in a company car.

UAB Agrolira, the company managed by Komskis and owned by his father, was found responsible for the fatal crash that killed the father of two in 2017. In 2019, the Lithuanian court ruled that both the driver and the company had to pay damages of some 100,000 euros ($102,721). However, most of that money never reached the victim’s family.

Siena’s investigation, published in 2020, found that Agrolira went out of business abruptly, just as the payment of damages was due. Within months, the company was declared bankrupt, with debts of more than 400,000 euros ($410,836) and only a fraction of its former assets remaining.

As the bankruptcy proceedings were starting, Kęstas Komskis transferred most of his shares to three men who worked either for Agrolira or other businesses tied to the Komskis family. When Siena spoke to the new investors, they all claimed to have no knowledge of owning the defunct business. Kęstas Komskis simultaneously launched a new company called Kalibrus that soon took over Agrolira’s operations.

Based on Siena’s findings, a criminal case was launched. Initially, both father and son faced charges, but ultimately only Algirdas Komskis was put on trial, due to lack of evidence against his father.

In addition to convicting Komskis, the Tauragė district court ordered Komskis to pay more than 170,000 euros ($174,585) to the victim’s family and Lithuanian tax authorities.

The court sentenced the politician’s son to seven months in prison and 18 months probation. If he does not violate the law within the probation period, he will not have to serve time in prison. All of his assets will remain frozen until he pays all that is owed to the victim’s family and the Lithuanian state.

Although Kęstas Komskis was not put on trial, the criminal case revealed his involvement in the downfall of Agrolira. All three new owners of the company claimed the senior Komskis personally gave them the documents needed to formalize the share transfer.

Neither Algirdas Komskis nor his father responded to Siena’s requests for comment. It is unclear if Komskis will appeal.

The senior Komskis, who served in Lithuanian parliament for several terms and went as high as deputy speaker, is currently a member of the municipal council in Pagėgiai, the family’s home district. Kęstas Komskis has already announced he is running for mayor in next year’s municipal election.