The European Commission proposed new legislation to tighten its gun laws in an effort to address the illegal trade in firearms which could rise due to the war in Ukraine. 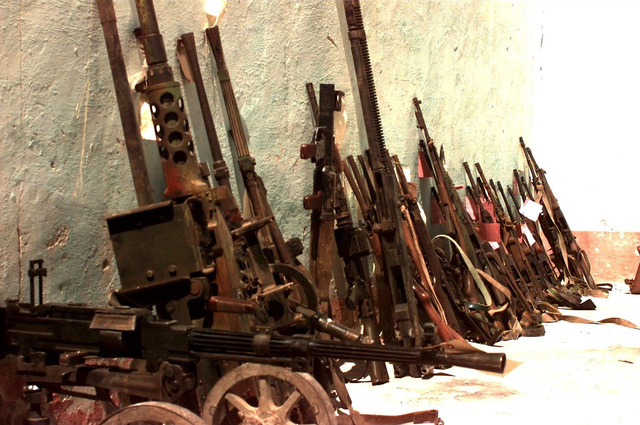 So far there is little evidence that western arms shipments to the Ukrainian military are being trafficked into Europe, but the fear has been latched on to by Russian propagandists. (Photo: The U.S. National Archives, NARA, License)The new procedures would aim to tightly track the flow of deadly weapons around the EU and would include an electronic licensing system for firearms manufactures as well as certification for end users.

The law also would include standardized definitions for signal and non-lethal weapons, such as those which fire teargas canisters, to separate them from lethal firearms. At the same time, the laws would simplify procedures for importing hunting and sport weapons.

“Firearms trafficking feeds organized crime within the EU and breeds political instability in the EU's neighborhood,” Margaritis Schinas, the ‘Vice-President for Promoting our European Way of Life’ said in the EU statement. “With the development of fast parcel delivery and of new technologies, trafficking of firearms is taking new forms to escape controls.”

Legislators need to catch up, he said, suggesting that the reform should “close down the loopholes in the existing rules which are often circumvented, leading to firearms being smuggled and diverted into the EU.”

“Criminals are constantly changing how they smuggle deadly weapons into the European Union. We need to stay one step ahead,” Commissioner for Home Affairs, Ylva Johansson, added.

Though it is incomparable to the United States where there are more than 120 guns per 100 people, some 35 million illicit weapons are believed to be in EU, that’s just about half the number of legally owned guns – 79 million as of 2019 - 630,000 of whom are listed as lost or stolen according to the EU’s registry.

However, the commission also pointed to the potential the war in Ukraine has to provide a new source of arms to the European black market.

“The Russian military aggression in Ukraine increases the potential of proliferation of firearms,” the statement by the European commission noted.

So far there is little evidence of that. But the fear has been latched on to by Russian propagandists who use it as a point to argue against Western military aid to the Ukrainian army.

"A considerable part of these weapons have already entered, or will soon enter, the black market," Maria Zarakhova, a spokeswoman for Russia’s Foreign Ministry said last month without offering any evidence. "The NATO military cargos are ending up in the hands of terrorists, extremists and criminal groups in the Middle East, central Africa and southeast Asia."

The spread of weapons after the conflict ends is a legitimate concern, past conflicts from the WWII to the Yugoslav wars and the cold war did result in a proliferation of illegal arms after soldiers set them down, but as long as active fighting continues in Ukraine, that is keeping them largely on the battlefields.

"So long as there remains the intense, frontline demand for small arms," Elias Yousif, a research analyst focused on international security issues told Business Insider, "I think it's going to be a pretty strong draw for those weapons to remain on the battlefield."

Despite the proposed bill, even the European commission acknowledged that they hadn’t yet seen much of a rise in arms trafficking.

"To date, there is no information indicating that large-scale firearms trafficking out of Ukraine is ongoing," the commission’s spokesperson, Yuliya Matsyk, said according to Insider.