The Central Bank of Iraq (CBI) has taken custody over a private bank whose majority owner had been misspending loans he took to finish a government project. The CBI asked the custodian to take legal measures against those who abused the bank’s funds. 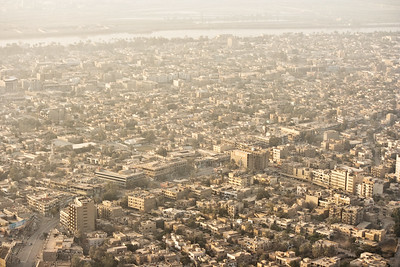 Iraq's capital Baghdad. (Photo: Omar Chatriwala, Flickr, License)The North Bank for Finance in 2008 issued letters of guarantee to four construction companies who were to rebuild hundreds of schools throughout the country, according to an OCCRP investigation published in September last year into how millions of dollars in public funds were spent on a government project to rebuild schools, but few were ever completed.

After having received advances from the government, none of the four companies finished the job and North Bank was asked to pay the invested money back to the ministry for education, according to the letters of guarantee it issued.

Instead, the bank’s majority shareholder and chairman, Iraqi Kurdish businessman Nozad Al-Jaf, suggested his construction company could take the contract over and finish the schools. Billions of dollars he received from the ministry to conclude the project were misspent and to fill the gaps, Al-Jaf took loans from North Bank with no interest. He never paid back.

In June of last year, the Central Bank sent a letter to the North Bank threatening legal action to collect around 145 billion Iraqi dinars (US$99 million) in debts. A year earlier, trading of North Bank shares was halted on the Iraq Stock exchange for failing to provide necessary disclosures.

Despite those warnings, North Bank’s funds continued to be misused until its funds were depleted.

The government said late last year that fewer than half of the 200 schools under this project, originally due to be finished by 2010, were completed to its standards.

Nozad Al-Jaf later argued that ISIS had prevented him from closing the schools in occupied areas.

The decision to appoint Mohammad Ali Hussein, a senior CBI officer as North Bank custodian, was issued on October 20 and signed by the bank’s acting deputy governor, Ammar Hamad Khalaf, according to an official order obtained by OCCRP.

The CBI’s decision was in line with articles in the 2004 Iraqi banking law which allows the CBI to appoint a custodian if a bank “does not meet its obligations, which include but are not limited to deposit liabilities,” and if the governor decides this measure is a necessity to secure the safety and stability of the overall banking system.

The CBI’s media department did not respond to requests for comment.

Member of the Board of Directors of the Central Bank of Iraq Majid Al-Suri told OCCRP that the custodianship was a “corrective measure” as a “a result of irregularities and instability in the bank’s banking work, and complaints submitted by customers and depositors to the Central Bank related to dealing and the mechanisms of withdrawal and deposit, in order to guarantee rights and avoid declaring bankruptcy.”

Al-Jaf also did not respond to requests for comment.

Dr. Ikram Abdel Aziz, an economic expert and member of the Board of Directors of the Iraqi Economists Syndicate, told OCCRP that custodianship is placed “for serious aspects represented by money laundering, illegal behavior and financial and administrative corruption.”

“The minimum period of guardianship is six months, and if it goes on for more than two years, the bank will be liquidated and all assets and properties are sold to pay the dues of depositors and customers,” he explained.

“The North Bank has been experiencing problems for 12 years and custodianship was placed on it in 2012 and lifted in 2016 after interventions and liquidation. The amount of the loss will not be clear now because there are problems and instability in the bank’s accounts and capital,” he added.