President of Peru Accused of Leading a Corruption Ring

Just days after Peruvian lawmakers accused top prosecutor Patricia Benavides of belonging to a criminal organization, she filed an official accusation with the Congress against sitting President Pedro Castillo, demanding an investigation into potential graft in public works. 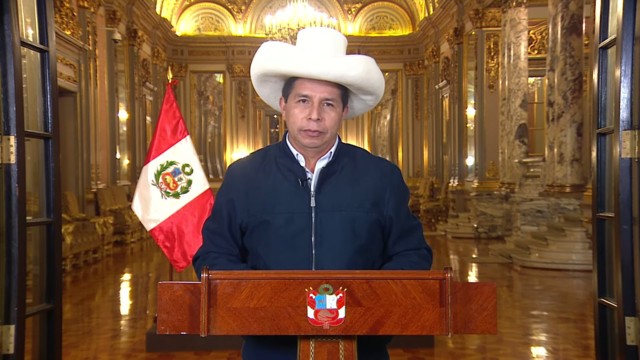 Prosecutors in Peru claim that Castillo is heading a corruption ring in the Ministry of Transport and Communications together with former minister Juan Silva as well as with other officials and businessmen to favor the Puente Tarata consortium and other companies in public bidding.

Juan Silva had arranged bribe payments of 0.5% of the total project of Puente Tarata. Castillo's nephews would have taken about $25,000 each, while the rest of the money would be split between the then Minister of Transport and the President.

The house of Castillo’s mother and sister was raided as part of the investigation.

Peru’s Congress will now examine the accusations to decide whether it will go any further. Lawmakers could decide to suspend Castillo from office if more than 65 of the 130 members were to vote in favor.

The move against these high-ranking officials comes at a time when prosecutor Benavides is being confronted with questions over her recent initiative to dismiss a prosecutor who was investigating her sister, Judge Enma Benavides, for freeing drug traffickers in exchange for bribes, and for obstructing investigations into a judicial mafia linked to a former president.

Despite Castillo’s continuous denials of accusations leveled against him, the complaint claims that his alleged criminal network profited through employing people tied to the scheme, collecting percentages of bids, and misusing presidential powers for illicit purposes.

In just over a year in office, Castillo and his inner circle has been under investigation for corruption for several months.