US Responds to Alleged Corruption in Pakistan’s Flood Relief Efforts

As any other matter involving American taxpayer money, the U.S. State Department said it is taking very seriously reports about corruption being responsible for only a fraction of relief funds reaching the over 30 million Pakistanis now displaced by floods. 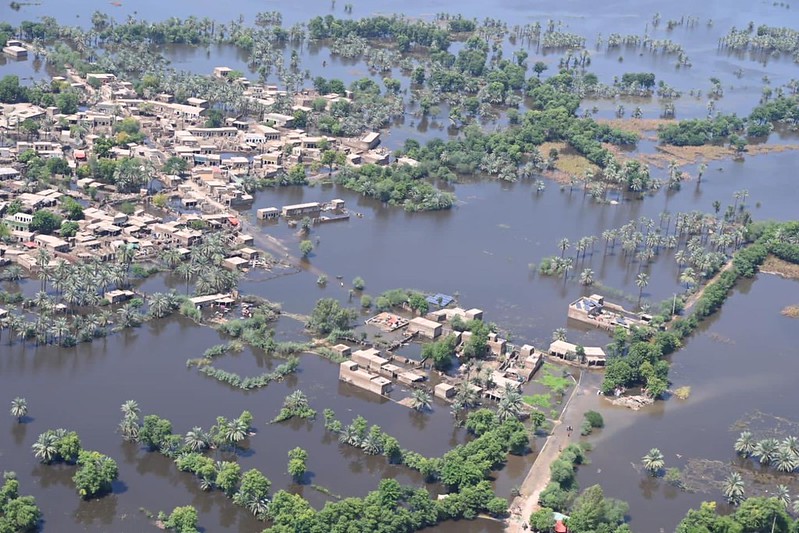 An aerial view of a Pakistan city, now submerged by flood water. (Photo: Ali Hyder Junejo, Flickr, License)The outbreak of the floods in June this year has ravaged Pakistan with thousands dead and left the government no choice but to declare a state of emergency. International aid has so far contributed roughly US$160 million to help rebuild the the affected area, with the U.S. itself having sent roughly $56.5 million and $10 million in food security assistance.

But reports have surfaced that less than a quarter of the $160 million has actually been dedicated to on-the-ground relief efforts. United Nations’ Resident and Humanitarian Coordinator Julien Harneis noted that of the total amount pledged, only $38.35 million has been converted into assistance for the Pakistani people, according to local media reports.

With the remainder unaccounted for, murmurs of corruption and looting have since risen up as a plausible explanation.

When asked on what measures are being taken to ensure that the funds are properly distributed and not being siphoned off by corruption, U.S. State Department spokesperson Ned Price said “this is something we take very seriously, not only in Pakistan but anywhere around the world where American taxpayer dollars are implicated and when there is an urgent humanitarian interest at stake.”

Price went on to explain that proper tracking mechanisms are put in place to ensure that the relief efforts reach those suffering in Pakistan.

Secretary of State Anthony L. Blinken noted last month that the U.S. has deployed 17 planes full of food and building materials for shelters, tents, tarps. This is in addition to other urgent supplies that will help farmers recover, like seeds and fertilizer, along with material needed to repair critical irrigation infrastructure that was damaged by the floods.

The U.S. also set up a Disaster Assistance Response Team, or DART, whose members traveled to 10 flood-affected districts in Pakistan last month in order to assess whether the humanitarian aid, funded by American taxpayer dollars, was properly distributed.

The floods, caused by intense monsoon rains and melting glaciers, have destroyed over two million homes and killed over a million of Pakistan's livestock. More than 33 million people—over seven percent of the country’s population—are now displaced and over 10 million children are in need of immediate, lifesaving support, according to UNICEF.

Critical infrastructure, public health facilities, and schools have been washed away. Over five million people also no longer have access to safe drinking water, leaving them with no alternative but to drink disease-ridden water and risk contracting life-threatening illnesses.

All of which is nothing compared to the over 1,700 individuals who have lost their lives.

In order to keep an eye on the proper distribution of humanitarian aid, Price noted that U.S. services are required to provide regular updates and report any potential diversions, seizures, or losses of resources immediately.

The UN has since called on world leaders to contribute $816 million to Pakistan’s flood relief efforts, up from the initial $160 million pledge.