The fight against foreign bribery is weakening among the world’s largest exporters, reaching a record low since Transparency International began tracking it in 2009. Only two countries are actively challenging it. 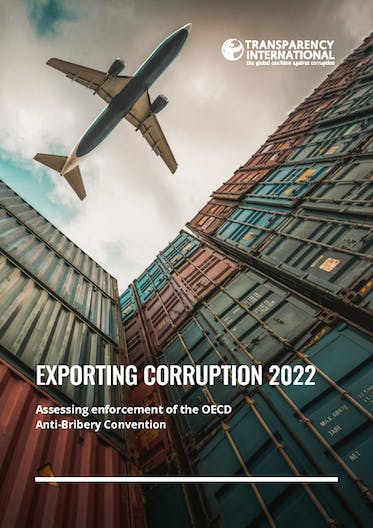 Chair of Transparency International, Delia Ferreira Rubio, stressed that corrupt transnational networks of businesses and their enablers leave a trail of harm – pushing out competitors, bypassing regulations and draining public budgets of resources.

“With rampant bribery in foreign public markets, illicit profits are secured at the expense of economic development, democracy and human rights,” she warned.

Transparency International emphasized that serious deficiencies in laws and justice systems impede enforcement in every country, while foreign bribery strikes weak public institutions and economies in nations like Brazil, Malaysia or Mozambique.

“Now just two countries – Switzerland and the United States, making up only 11.8 percent of global exports – are considered ‘active enforcers’ that investigate, charge and impose sanctions commensurate with their share of exports,” read the report.

Another two countries known as “active enforcers” – the United Kingdom with 3.4 percent of world exports, and Israel – have reduced their enforcement to moderate this year.

According to the research, most of the surveyed countries have weak or no enforcement at all, including the world’s largest exporter – China.

Transparency International also warned that in the group of 38 countries studied, which account for 55 percent of the global exports, “foreign bribery abuses go unpunished.”

“Even in countries that do enforce, foreign bribery continues to be treated as a victimless crime. This means states whose companies commit crimes abroad fill their treasuries with multimillion dollar penalties while victims are left to bear the cost,” head of conventions at Transparency International and lead author of the report, Gillian Dell, said.

She emphasized the importance of developing transparent and accountable processes to recognize and recompense victims, including foreign nations, commercial competitors, and whole communities affected by foreign bribery.

However, there is reason for some optimism, according to Transparency International.

“The courageous work of investigative journalists, whistleblowers and NGOs in uncovering egregious cross-border cases has made up some ground left by the inaction of major exporters,” it said.

According to the research, law enforcement agencies are also beginning to work more closely together, which is critical to success in many complicated cross-border crimes.

The report cites the “infamous 1MDB case,” underlining that “Malaysia, Singapore, the U.K. and the U.S. worked together to obtain US$2.3 billion in penalties and $606 million in disgorgement.”

“Governments today are faced with many challenges – from rising kleptocracy to climate disaster and economic turmoil. But leaders must not lose sight of the cross-border corruption that exacerbates these threats and blocks solutions,” Transparency International’s chair, Delia Ferreira Rubio, said.