Authorities arrested three out of 13 suspects of Tuesday’s armed attack on a gold convoy in southern Zimbabwe, in which 11.6 kilograms of gold worth US$650,000 were stolen, the Zimbabwe Republic Police said in a press statement. 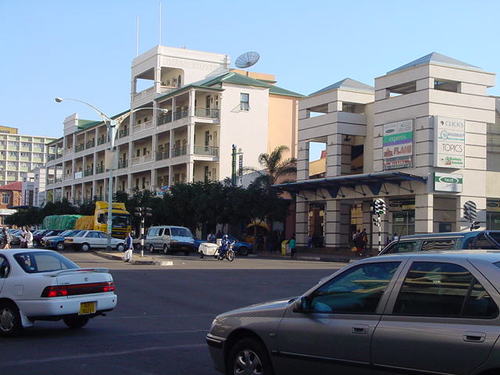 Bulawayo, Zimbabwe’s second-largest city, has one of the highest crime rates in the country. (Photo: Gppoer212, Wikimedia, License)“The Zimbabwe Republic Police confirms the arrest of Antony Moyo (39), Wilson Mutandwa (24) and Ernest Mutandwa (30),” the statement informed. The remaining 10 men are on the run.

Soon after having left the How Mine and heading to the office of Fidelity Printers, a state-owned gold monopsony in the nearby city of Bulawayo, the convoy was attacked by the men traveling in three cars.

Following a brief shootout, the group first disarmed the security guards, appropriating their weapons and then seized the gold.

One of the attackers was reportedly shot but managed to escape with the rest of the group. The attackers were chased at first but lost when they dispersed on the outskirts of Bulawayo.

However, one of the cars used in the attack was left abandoned at the scene. Identifying its owner, the police were able to establish that the car was at times seen being driven by Antony Moyo.

After being arrested, Moyo implicated Wilson and Earnest Mutandwa, who were subsequently arrested as well. Earnest was caught in the border town of Beitbridge when trying to escape to South Africa.

“Armed robbery syndicates, including company employees and associates leaking information to criminals, are warned that their days are numbered,” said the police statement.

Zimbabwe, whose economy is once again sinking into stagflation, has seen a spike in violent crime in recent years. In 2017, the Zimbabwe National Statistics Agency recorded only 429 armed robberies whilst during the first ten months of 2021, the number reached 922.