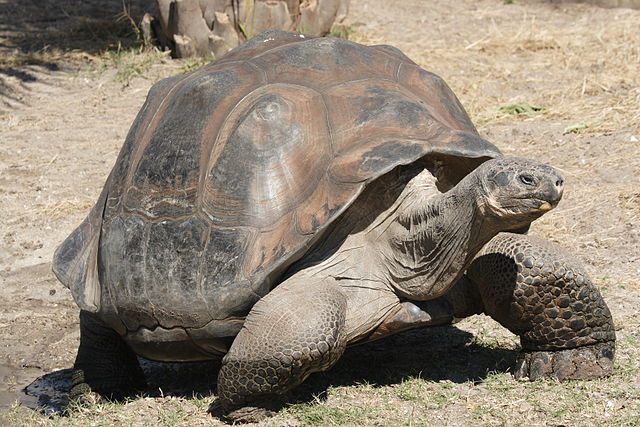 All of the remaining 18 Giant Tortoise species are red listed by the International Union for Conservation of Nature, with over half classified as ‘Endangered’ or ‘Critically Endangered’. (Photo: Matthew Field, Wikimedia, License)Naval authorities who searched the traffickers’ vessel found golden iguanas stashed inside plastic bags, in addition to 84 giant tortoises concealed in cardboard boxes.

The three were apprehended by the Ecuadorian Navy in June earlier this year and charged with trafficking giant tortoises and golden iguanas from the Galápagos. The two species are considered protected due to their conservation status.

Prosecutors said that seven of the tortoises died while on board the smugglers’ vessel. The ones who were successfully recovered were brought in for a thorough veterinary inspection before authorities transferred them to a marine life conservation park.

Many species who call the Galápagos Islands home are listed as endangered due to human intervention; several are now even extinct due to over-hunting and fishing.

Historically, the giant tortoise ranks amongst the islands’ most decimated species at the hands of human intervention. Buccaneers, hunters, and whalers largely exploited them for food and oil throughout the 18th and 19th centuries.

Even today, they are still poached for their eggs and for their status as a rare trophy. Live specimens can be worth upwards of several thousand dollars.

As a result, many wildlife conservation NGOs characterize the giant tortoise as a ‘Threatened’ species; the World Wildlife Fund for Nature (WWF) lists them as ‘Vulnerable’.

The International Union for Conservation of Nature, which keeps tabs on a Red List of Threatened Species, has documented 18 tortoise species still alive today. Of those, nine are classified as ‘Critically Endangered’, three as ‘Endangered’, and six as ‘Vulnerable’.

Six suspects were originally arrested and prosecuted for illicitly removing the animals from the Galápagos Islands; the judge eventually found three of them innocent after determining that they did not know protected species were actually on board.

The other three, Freddy Alfonso CR, Darío JC and María Petrona S. Ch., admitted to their role in the conspiracy and were collectively sentenced to one year in prison.